Dusk falls south of the Yarra, and as the sun sets people start to think about what to do on a winter's Saturday night. 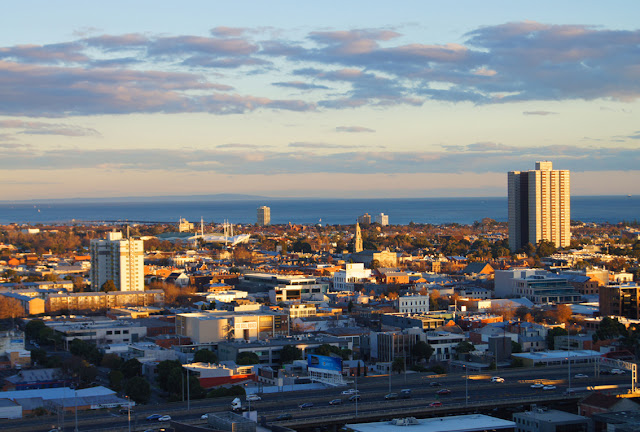 Traffic builds up as evening progresses. Looking towards the southwest on Port Phillip Bay. 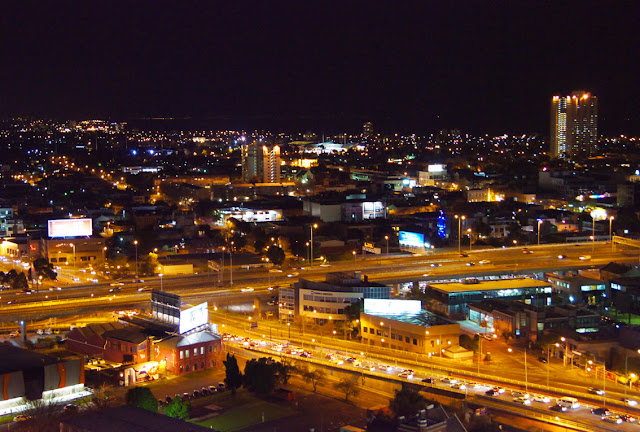 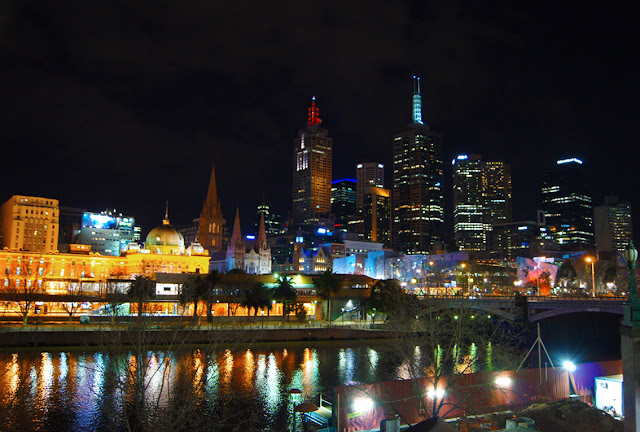 The relatively new footbridge over the Yarra connects north and south and is always busy. The Ponyfish Island café and bar just under the bridge is in a good location, if a trifle damp! 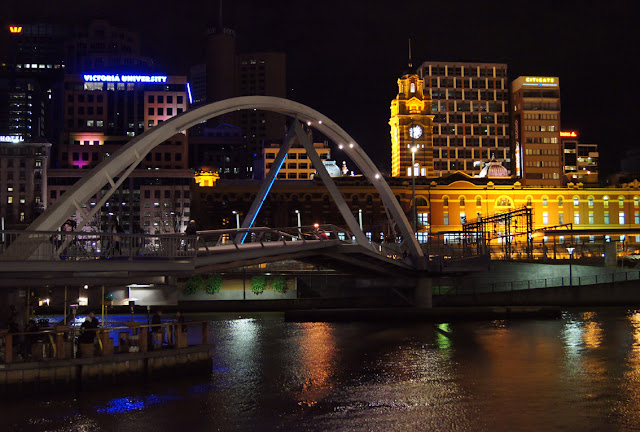 Saturday night is a busy time on Ponyfish Island even in winter! 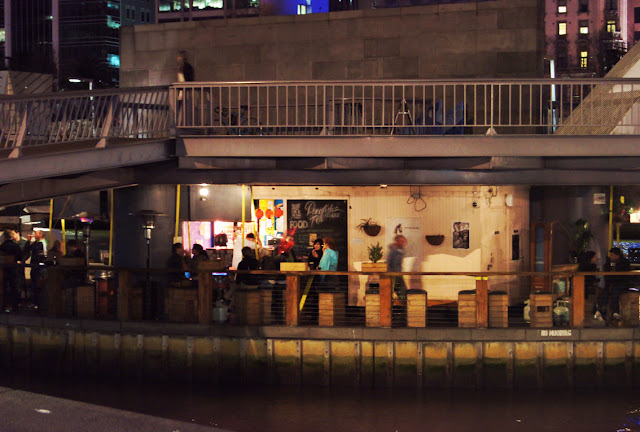 The Sandridge Bridge is an old railway bridge over the Yarra that has been converted into another pedestrian bridge and the interesting sculptures that adorn it illustrate the immigrant records along the bridge walkway. In 2001 the State Government held an expressions of interest process for refurbishment of the bridge, seeking commercial ventures, but the process was not successful and in 2003 Melbourne City Council and the Department of Sustainability and Environment took over. They committed $15.5 million to restore the bridge, create a plaza on the Southbank side and make connections to walkways on the Yarra north bank. In 2005 it was announced that artist Nadim Karam had been commissioned to create ten abstract sculptures in a piece titled "The Travellers", which represents the different types of immigrants who traditionally arrived by train over the bridge from Station Pier. Nine of the sculptures move across the bridge in a 15-minute sequence, moving on bogies running between the two bridge spans 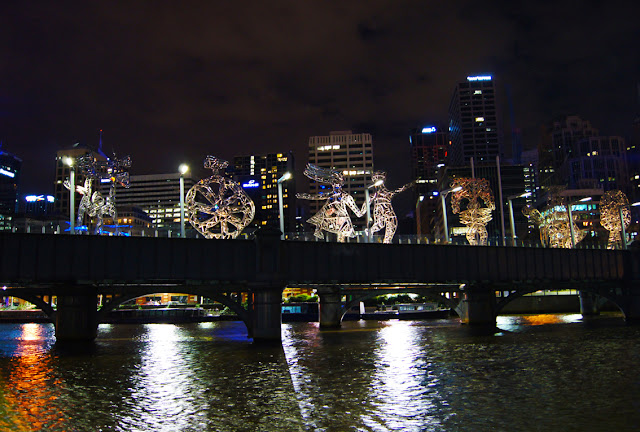 Along the Yarra Promenade one sees all sorts of artists, buskers, entertainers. More so in summer, but even in winter these artists were braving the cold night to produce ephemeral masterpieces on the pavement. 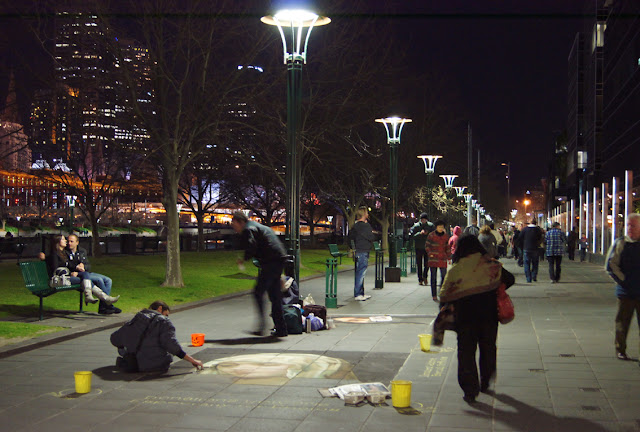 Nothing like a little rowing in the balmy 7˚C of a Melbourne winter evening! The clocktower of the Flinders St Station is a familiar sight.  Flinders St Station is the oldest station in Australia (1910) although the first station on this site opened in 1854.  Flinders Street is the busiest suburban railway station in the southern hemisphere even after the completion of the city loop railway subway and its 700 metre main platform is the longest in the country. 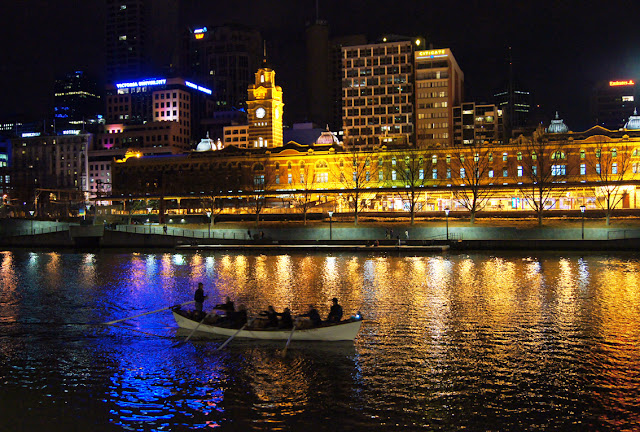 If rowing is not your cup of tea, perhaps you may enjoy some Melbourne Yarra River Cruising. The city lights are infinitely more appealing from the (heated) cabin! 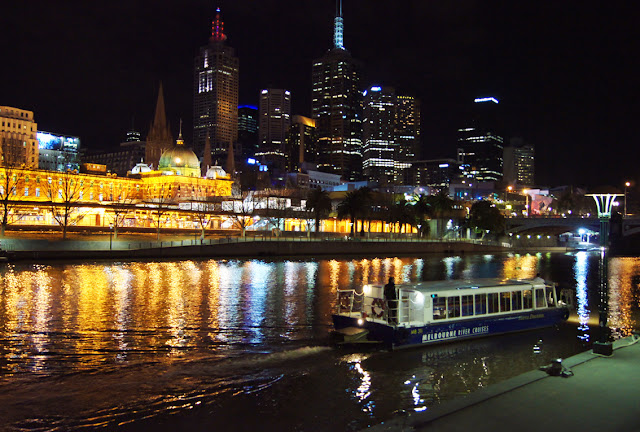 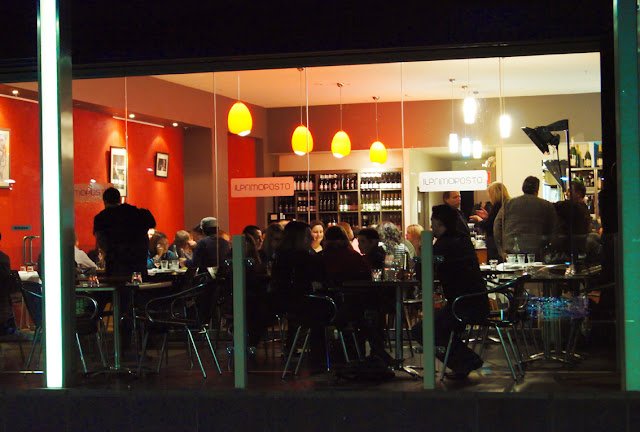 Melbournians enjoy their Saturday night out, whether it's for wining, dining, promenading, gambling, or otherwise gallivanting. 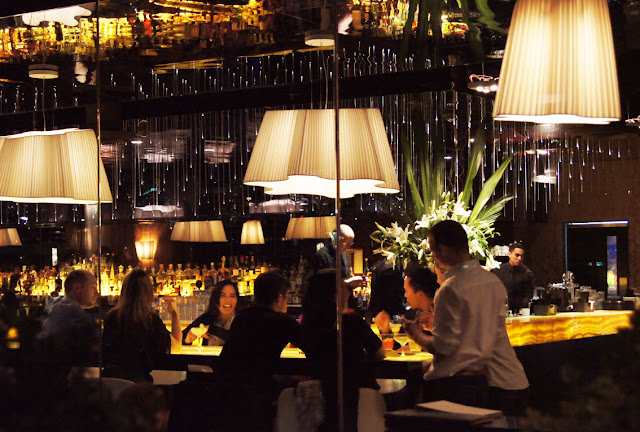 Dominating the Southbank landscape is the Crown Casino complex, here seen from Southbank Plaza. One of Nadim Karam's sculptures to the right. Crown's current casino complex opened in 1997, after moving from its original location from 1994 on the north bank of the Yarra. It is one of the central features of the Southbank area in the central business district and the Crown Promenade fronts onto the waterfront as part of Southbank Promenade. Children under 18 are permitted into the entertainment section of complex, but not into the gaming area or areas serving alcohol. The entire complex has a space of 510,000 m² which is equivalent to 2 city blocks, making it the largest casino complex in the Southern Hemisphere and one of the largest in the world. 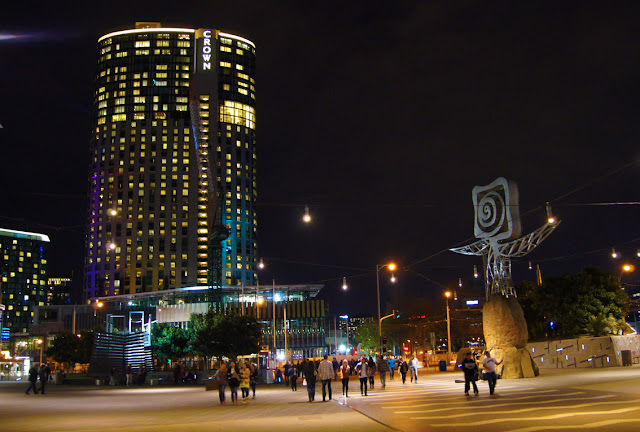 The foyer of the Crown Towers Hotel, associated with the Casino. 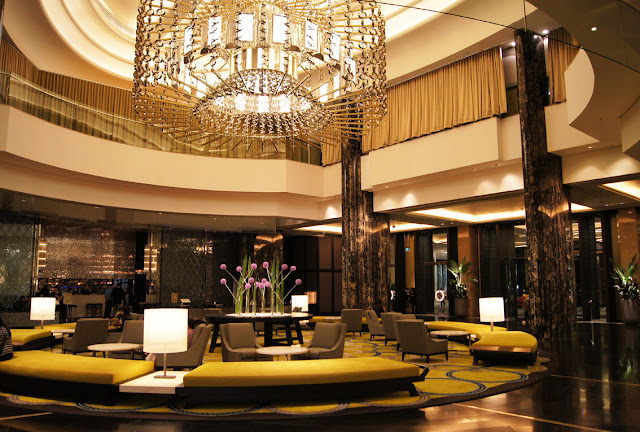 The Atrium of the entertainment complex of the Crown Casino, where there are constant light and music shows enjoyed by visitors. 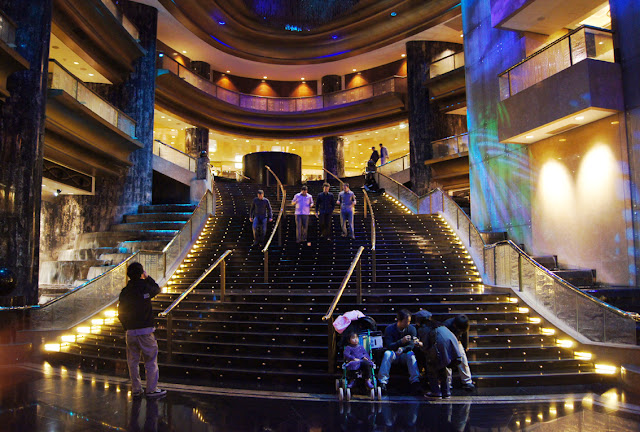 Another view of the Atrium from the top of the stairs. 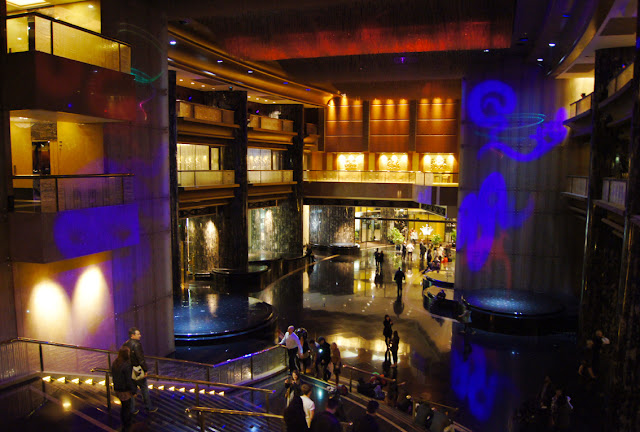 The bar of the ground floor Casino area, adjacent to the atrium. 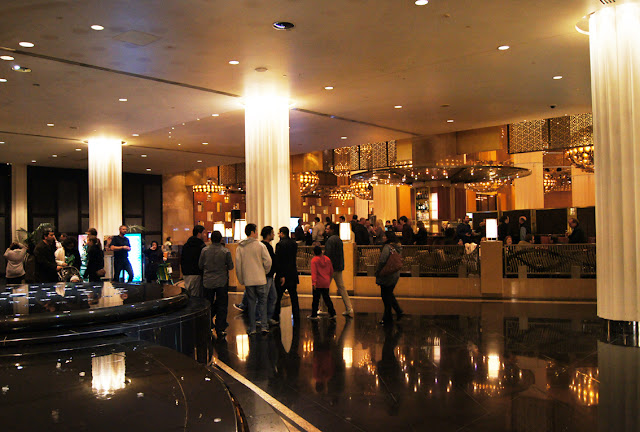 Well, it wouldn't be a casino without a few of these facilities! 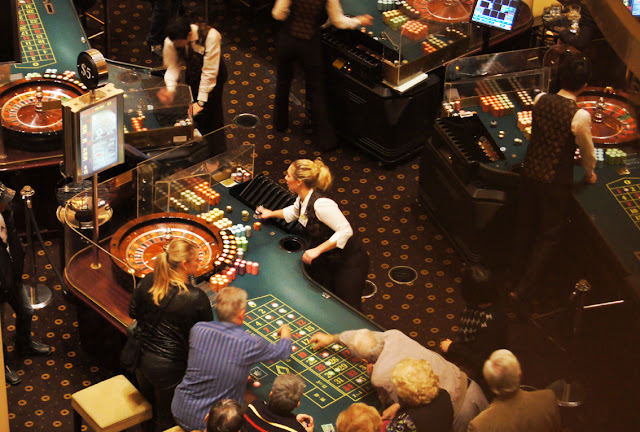 "The Conservatory" is one of the Crown restaurants on the first floor.  It has an open, airy feel with light decor, high ceilings and huge windows overlooking the Yarra. 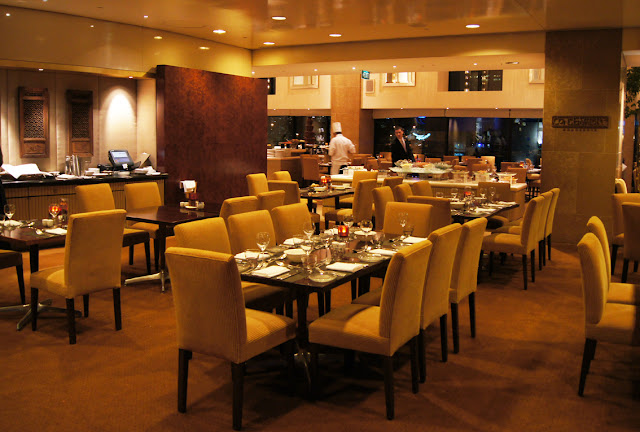 One of the attractive features of the Crown Atrium are the fountains, which are synchronised with the sound and light show. 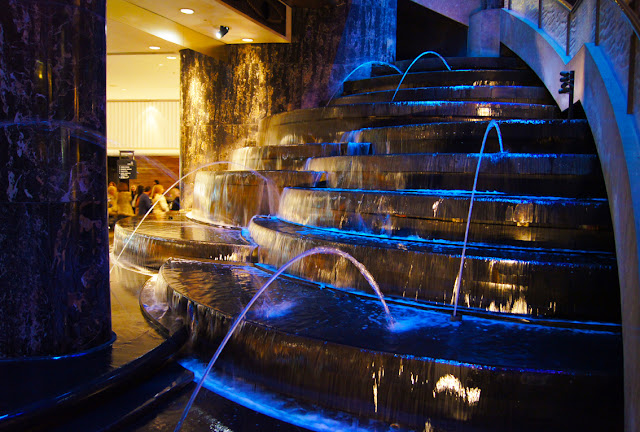 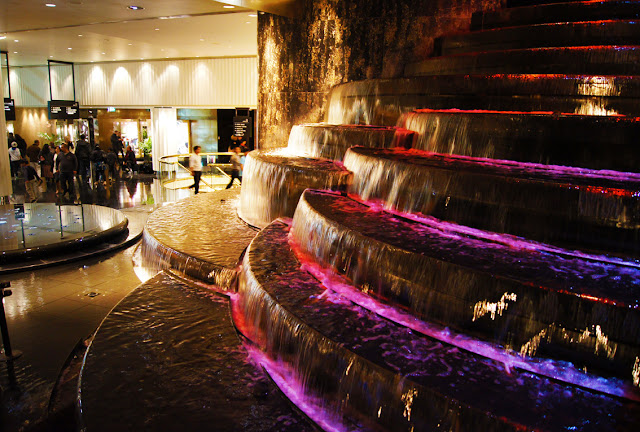 One the hour, along the promenade outside the Casino there is a display of jets of fire that can quite terrify someone standing nearby who does not know about them or is not expecting them! 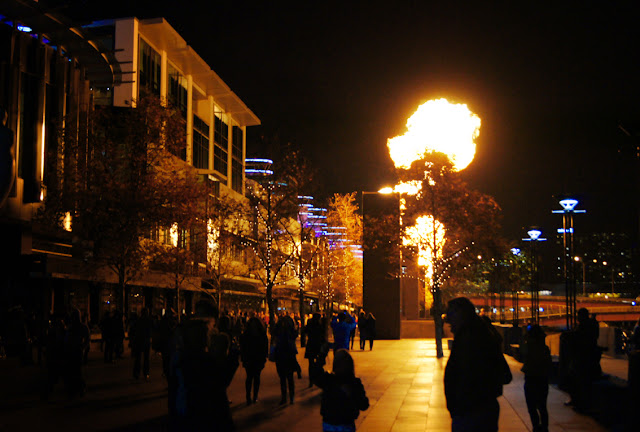 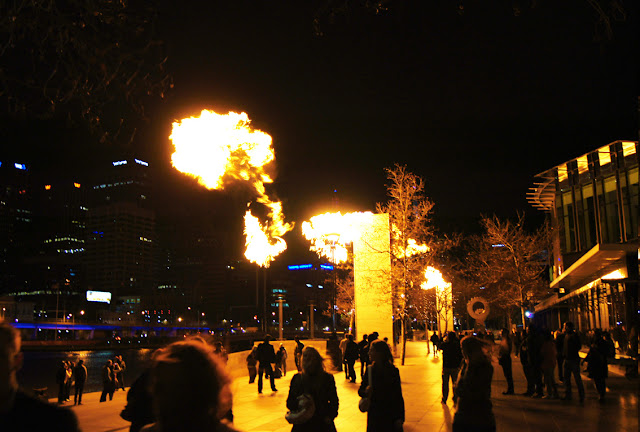 The lights on the trees are a nice touch... 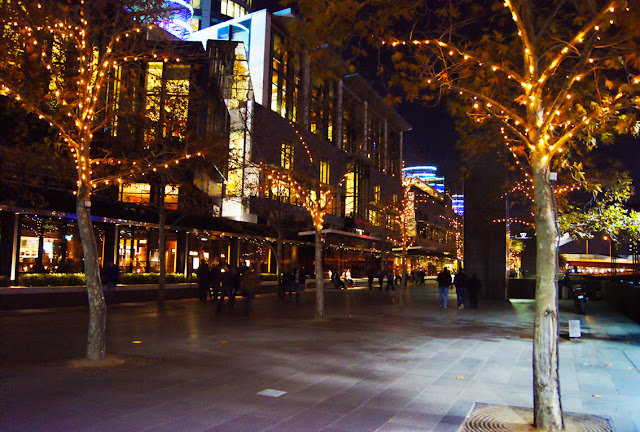 You don't need much to enjoy yourself on a Saturday night... 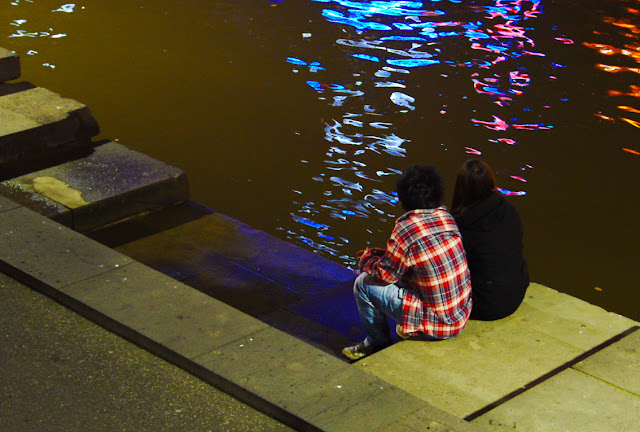 Posted by Melbourne Australia Photos at 19:46:00