Merri Creek flows about 60 km from the Great Dividing Range through Melbourne’s northern suburbs to the Yarra River. Merri Creek is an environmental, heritage and recreation corridor that draws its significance from its role as a continuous corridor as it does from the qualities of individual reaches. All areas of the Creek are important because they contribute to the linking of areas of environmental, heritage and recreational value along the Creek. At Coburg, one of Melbourne's northern suburbs, the creek has been dammed to form a lake. 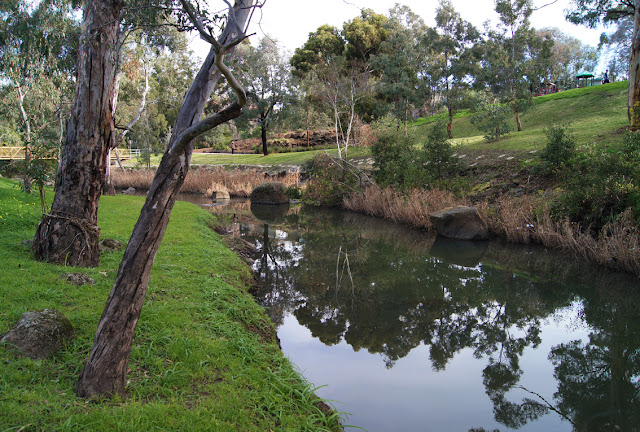 Merri Creek and its immediate surrounds are host to some of the most threatened ecosystems in Australia. The Creek has a unique role to play in the preservation of threatened flora and fauna and the maintenance of vegetation communities that in other places have almost been totally destroyed. 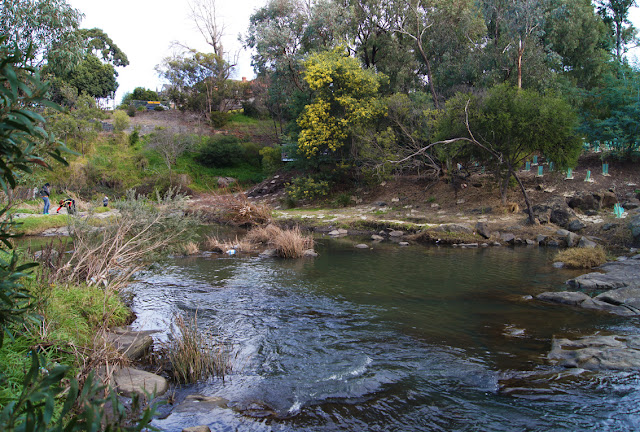 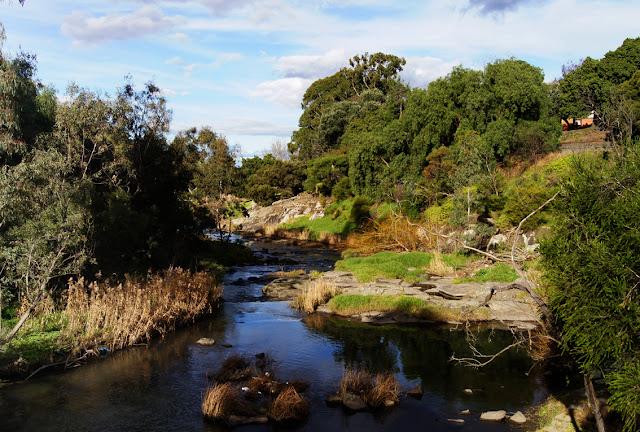 Eucalyptus caesia  (Gungurru) is a well known tree amongst Australian plant enthusiasts and has many beautiful features, the best of which are its large, showy flowers that bloom in late winter/spring. 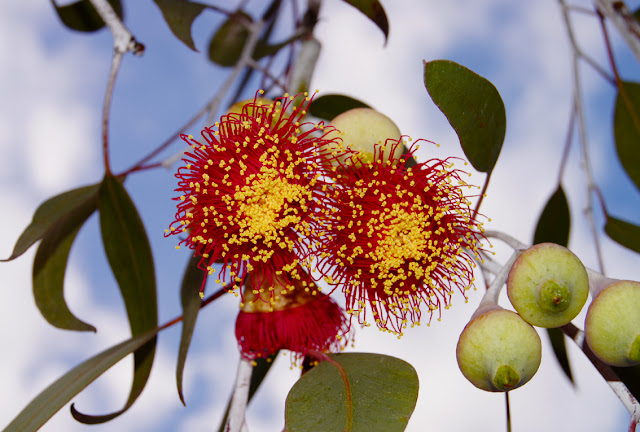 Acacia pycnantha (golden wattle) has enjoyed popular acceptance as Australia's national flower for much of the 20th century but it was not proclaimed as the national floral emblem until 1988, the year of Australia's bicentenary. Its golden yellow powder puff blossoms provide a cheery glow in even the grayest winter's day. 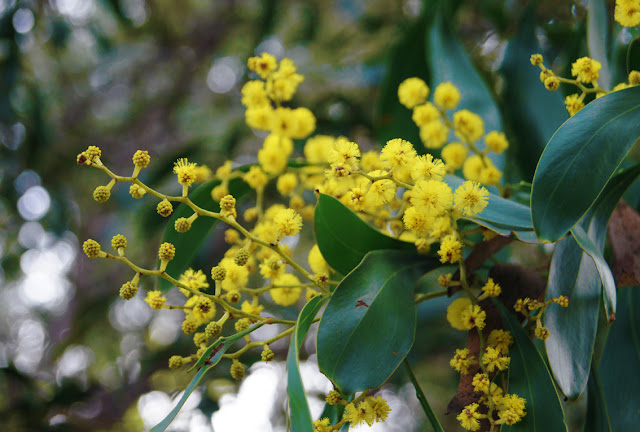 With the revegetation, cleaning up and general maintenance of the Creek, there have been confirmed sightings of platypus in Merri Creek, especially in its upper reaches int eh outer metropolitan area. 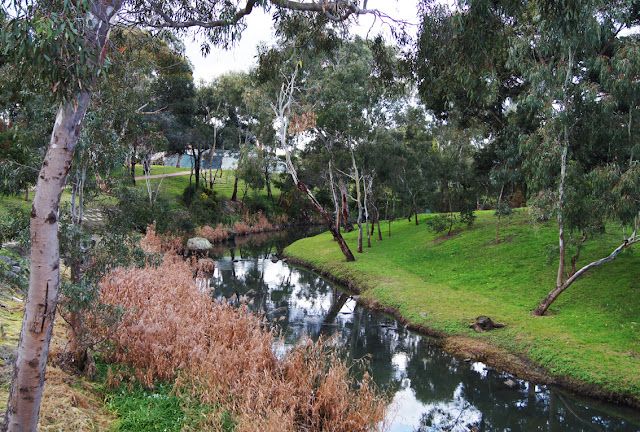 The parklands around Merri Creek provide a serene place for walking, quiet reflection and contemplation. 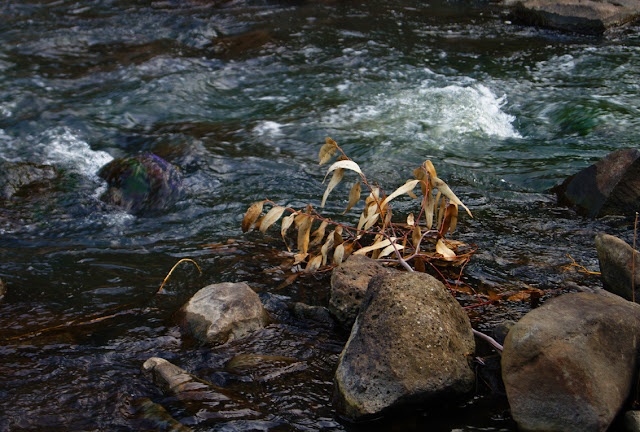 One can focus in on the tiny details, each a microcosm of life where great dramas are played out. 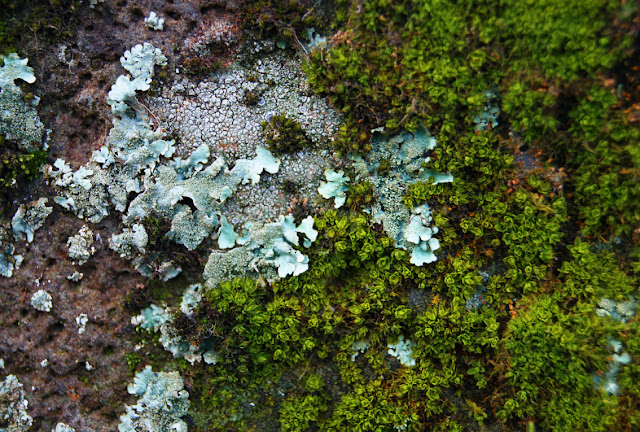 Water fowl populate the wetlands in great abundance and their cries provide a welcome addition to the sound of flowing water. 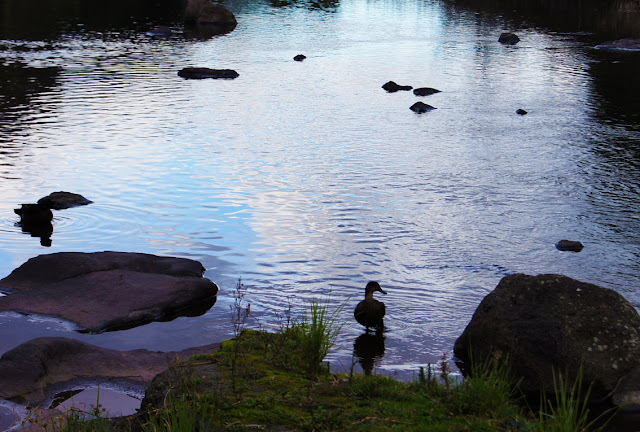 The most well known and easily recognisable duck in the world, the mallard (Anas platyrhynchos) is also a popular game bird. These ducks frequently crossbreed with other duck species, making identification challenging for many of their offspring. Males have the more colourful plumage including the iridescent blue-green head and distinctive tail curl, while females are a mottled brown. As a dabbling duck, mallards regularly feed in shallow rivers, ponds and lakes, and they can become quite tame near human habitation. 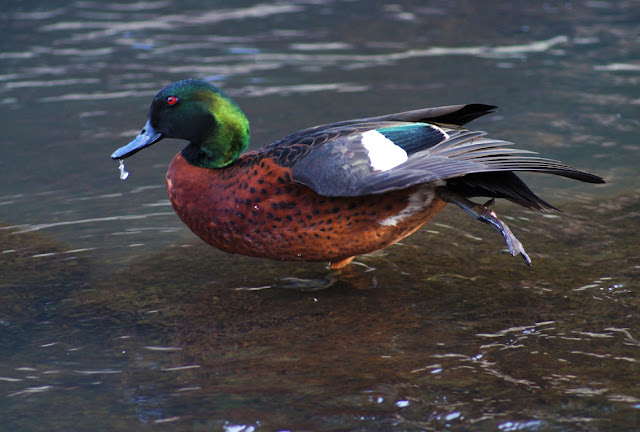 Ducks are an endless source of fascination for children (and not only!). 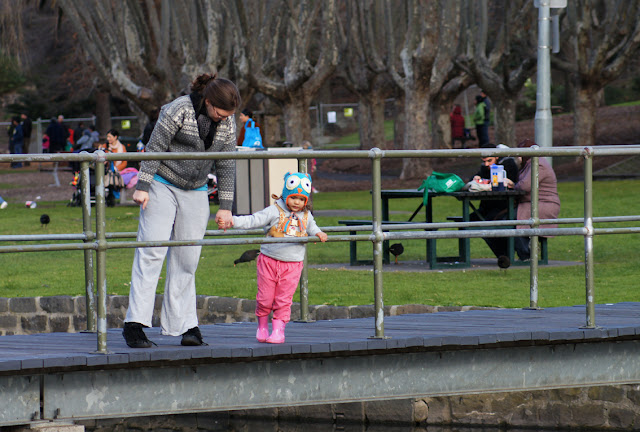 The park around Coburg Lake, through which Merri Creek flows has a number of facilities, including barbeques, picnic areas, playgrounds and areas to exercise in. There is always time to play... 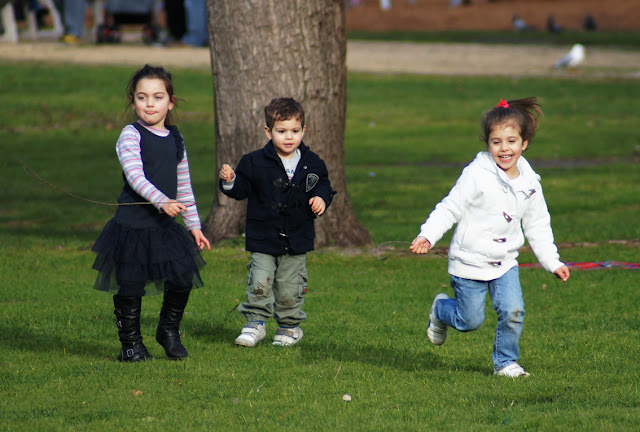 Or to pray... Coburg is a lively multicultural suburb and has a large Muslim population. 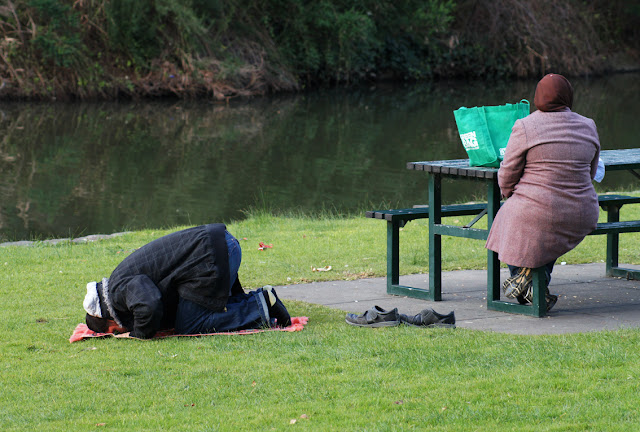 Feeding the ducks can become quite an addictive habit and one frequently sees the same people indulging in this pastime. 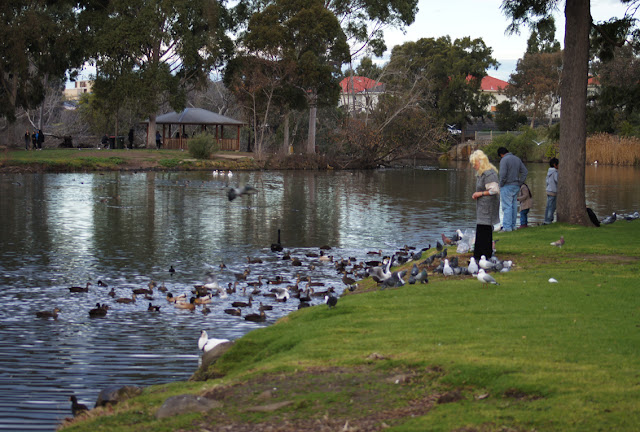 The scramble for food often ends to the advantage of the seagulls, which are quite aggressive and will dive in and steal the food right under the bill of the ducks! 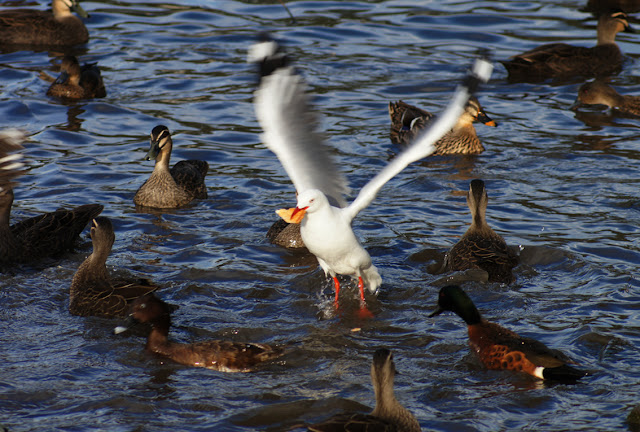 This was a beautiful, golden afternoon, which no doubt would have provided some happy memories to many... 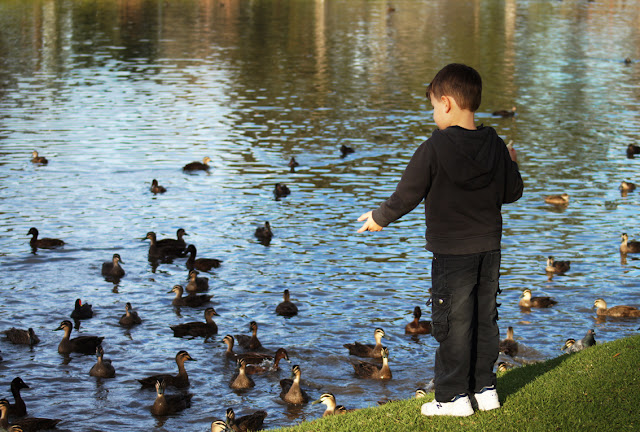 Hark to the whimper of the sea-gull;
He weeps because he’s not an ea-gull.
Suppose you were, you silly sea-gull.
Could you explain it to your she-gull?
– Ogden Nash 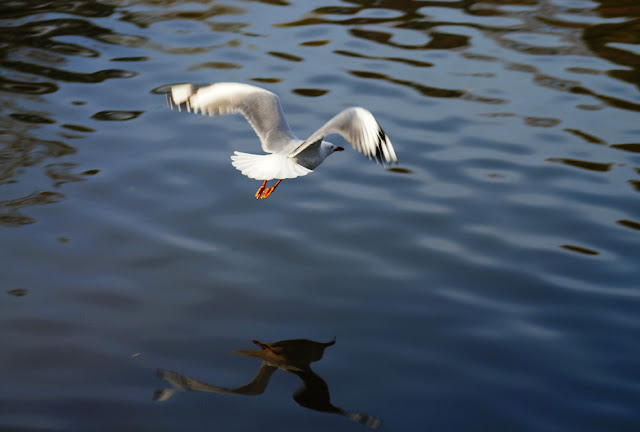 One must not forget that despite the mellow sunlight and fine day, it was still winter. The chilly air had cooled our hands and our noses had become red. The twigs of the trees were still bare, but there were buds swelling... 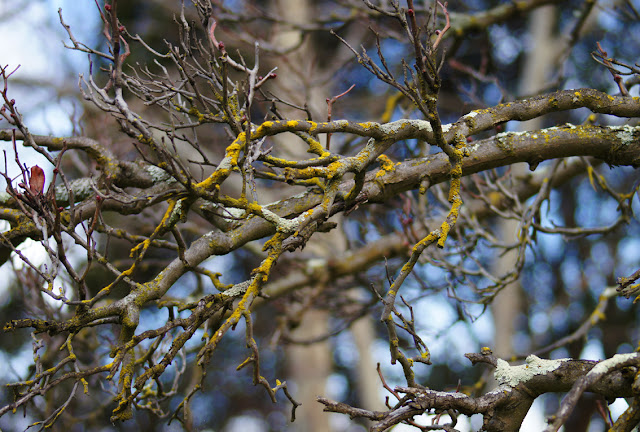 As afternoon marched on, we took the path back up to the northern side of the park. the sun was blindingly brilliant! 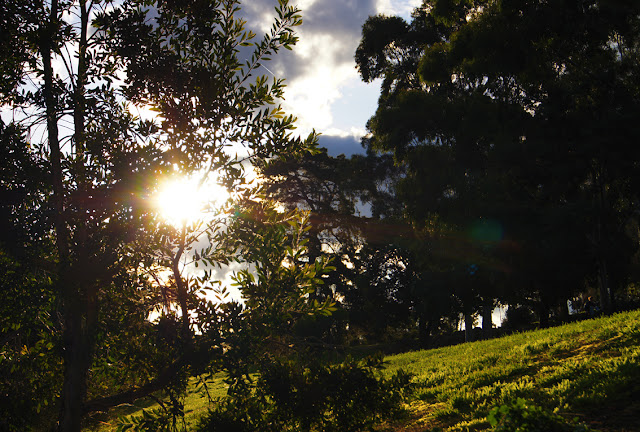 This was an easily missed place: A totally enclosed leafy arbour, which had a small opening amongst the branches and the leaves. Peering in, one saw a small space surrounded by branches and greenery, seemingly like a fairy's bower. 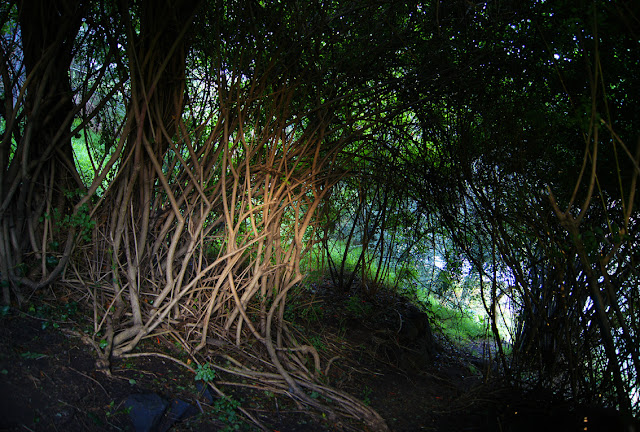 Another reminder of Coburg's multicultural community is this staute in the Coburg Lake Reserve. It is by sculptor Antonio Masini and is called “Man of the Valley”.  It is a gift from the Italian cities of Viggiano and Grumento. The sculpture is, in the words of its creator, “a tribute to the thousands of Lucanian migrants throughout the world and in Australia in particular. This monument represents the determination and courage inherent in the immigrant.” 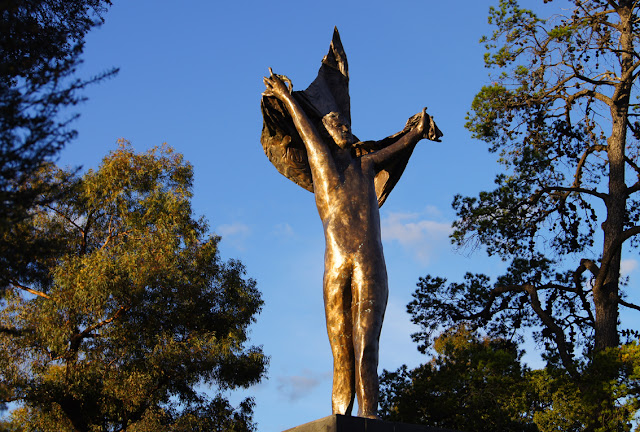 The setting sun colours these Pyracantha berries an intense red. 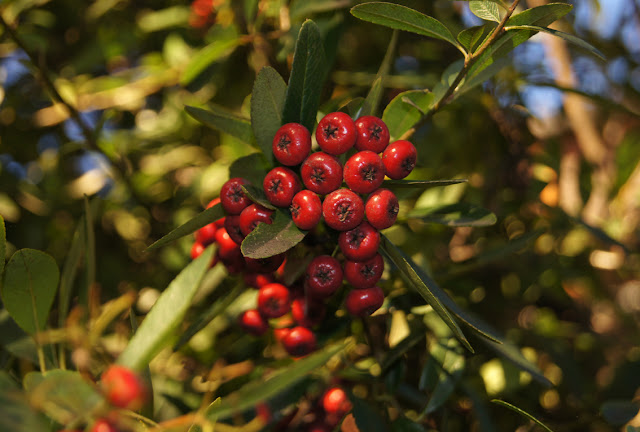 And the blooming, fragrant Viburnum is a welcome reminder of spring... 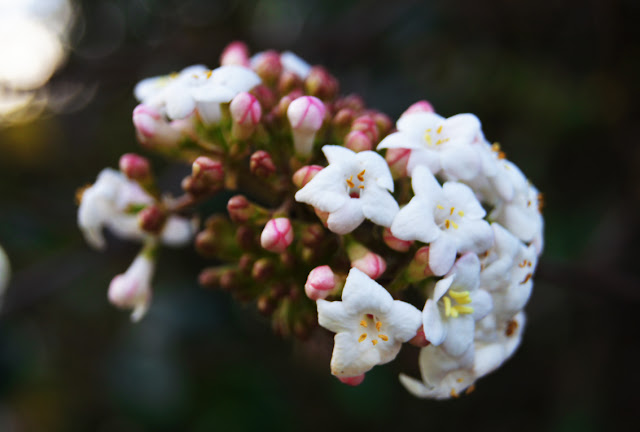 Posted by Melbourne Australia Photos at 19:29:00