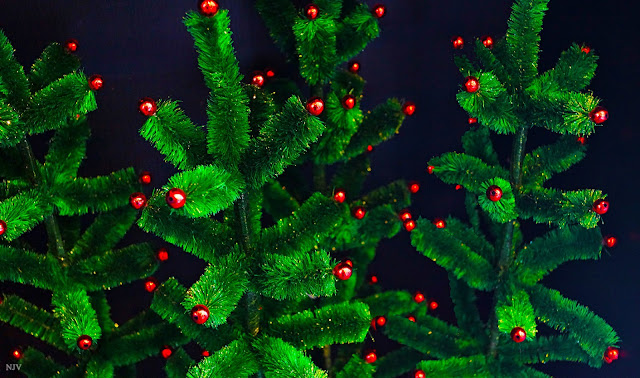 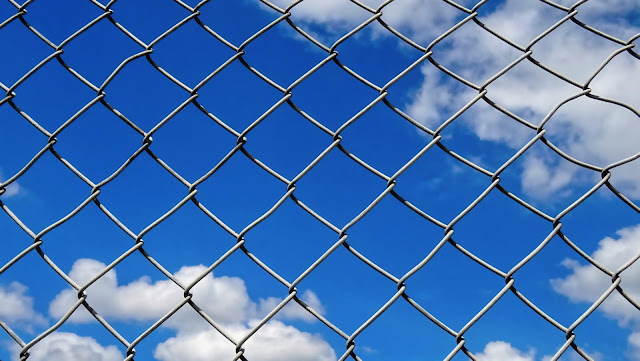 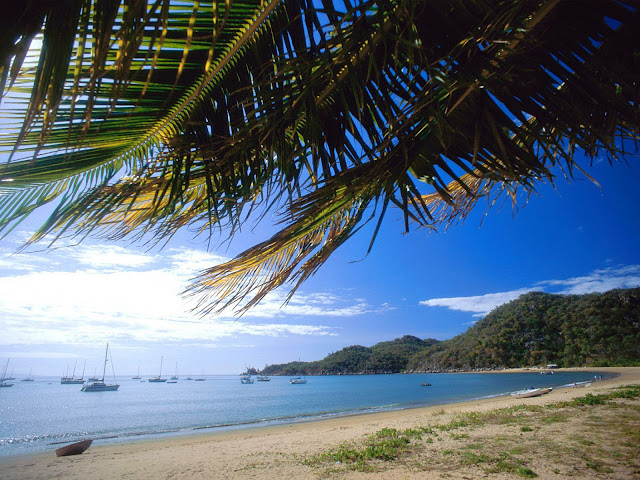 FLY ME TO THE MOON! 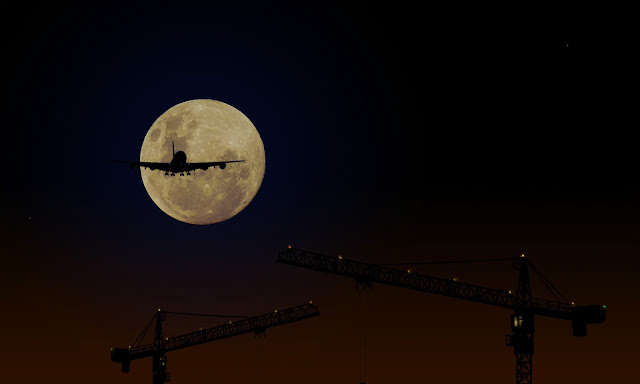 A garden hybrid variety of gladiolus in quite an unusual colour combination.
This post is part of the Floral Friday Fotos meme. 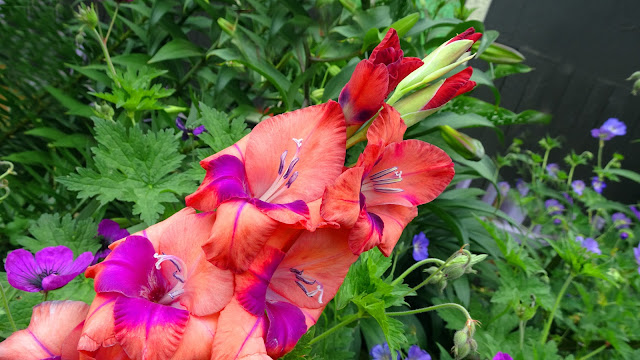 Santorini (Greek: Σαντορίνη), classically Thera (Greek: Θήρα); is an island in the southern Aegean Sea, about 200 km southeast of Greece's mainland. It is the largest island of a small, circular archipelago which bears the same name and is the remnant of a volcanic caldera. It forms the southernmost member of the Cyclades group of islands, with an area of approximately 73 km2 and a 2011 census population of 15,550. The municipality of Santorini comprises the inhabited islands of Santorini and Therasia and the uninhabited islands of Nea Kameni, Palaia Kameni, Aspronisi, and Christiana. The total land area is 90.623 km2. Santorini is part of the Thira regional unit.
Santorini is essentially what remained after an enormous volcanic eruption that destroyed the earliest settlements on a formerly single island, and created the current geological caldera. A giant central, rectangular lagoon, which measures about 12 by 7 km, is surrounded by 300 m high, steep cliffs on three sides. The main island slopes downward to the Aegean Sea. On the fourth side, the lagoon is separated from the sea by another much smaller island called Therasia; the lagoon is connected to the sea in two places, in the northwest and southwest. The depth of the caldera, at 400m, makes it possible for all but the largest ships to anchor anywhere in the protected bay; there is also a newly built marina at Vlychada, on the southwestern coast. The island's principal port is Athinias. The capital, Fira, clings to the top of the cliff looking down on the lagoon.
The expansion of tourism has resulted in the growth of the economy and population. The major settlements include Fira (Phira), Oia, Emporio, Kamari, Perissa, Imerovigli, Pyrgos, and Therasia. Akrotiri is a major archaeological site, with ruins from the Minoan era. Santorini's primary industry is tourism, particularly in the summer months. Santorini was ranked world's top island for many other magazines and travel sites, including the Travel+Leisure Magazine, the BBC, as well as the US News.
This post is part of the Our World Tuesday meme,
and also part of the Ruby Tuesday meme,
and also part of the Travel Tuesday meme,
and also part of the Wordless Wednesday meme. 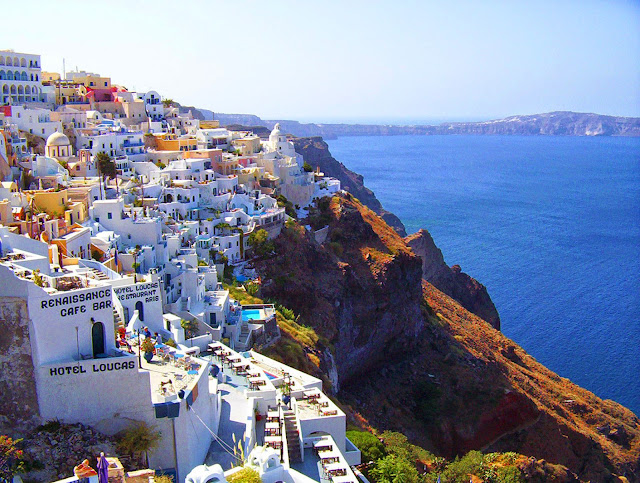 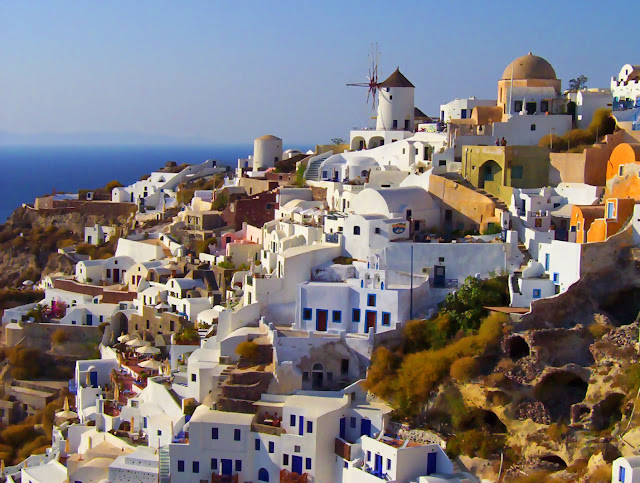 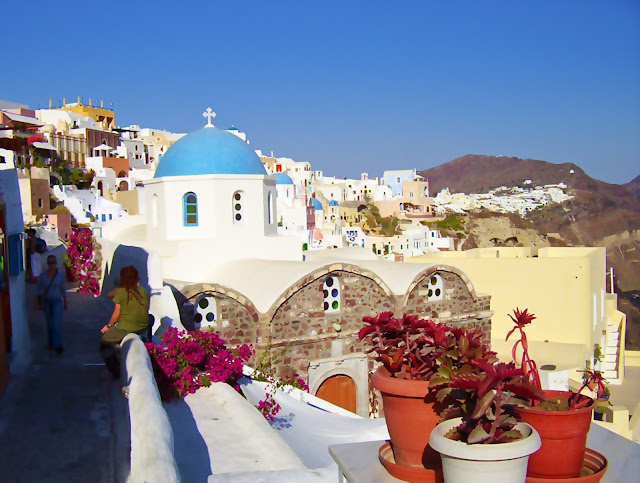 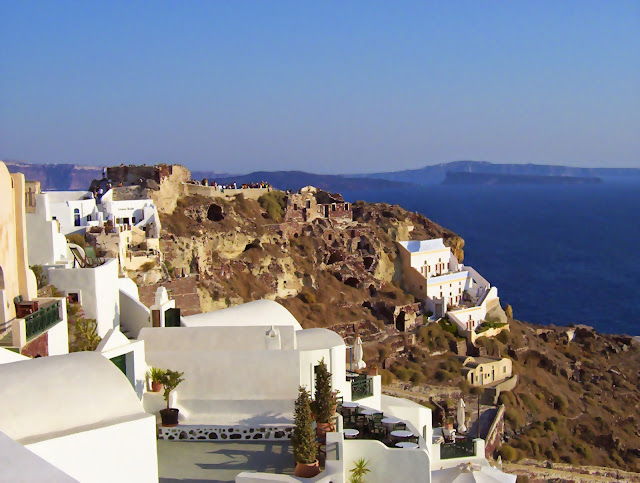 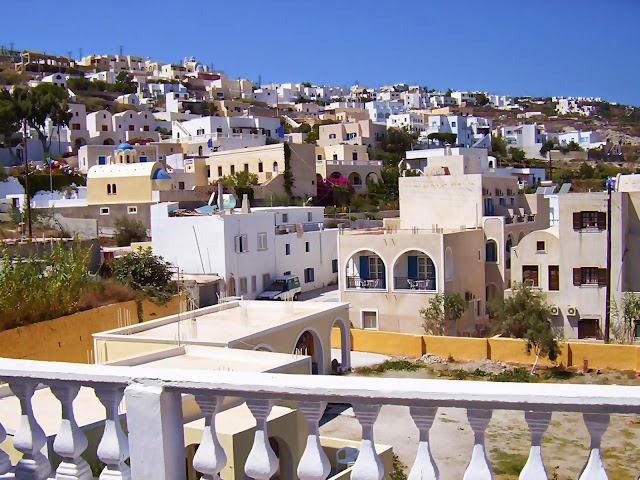 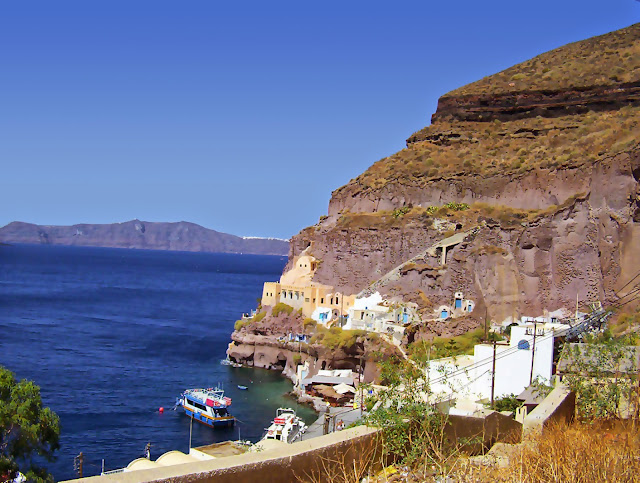 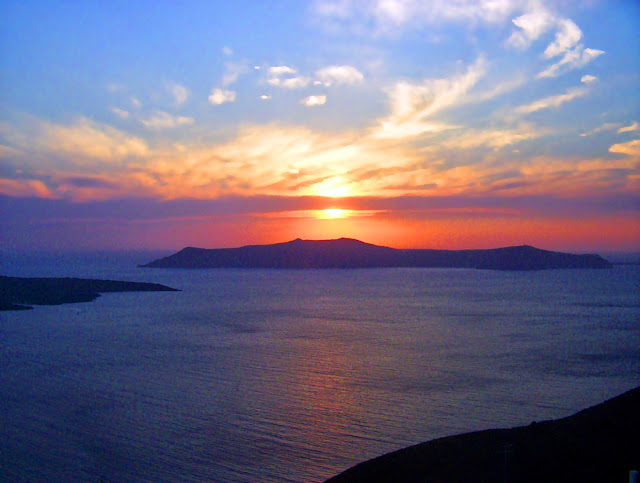 Love amongst the clivias... 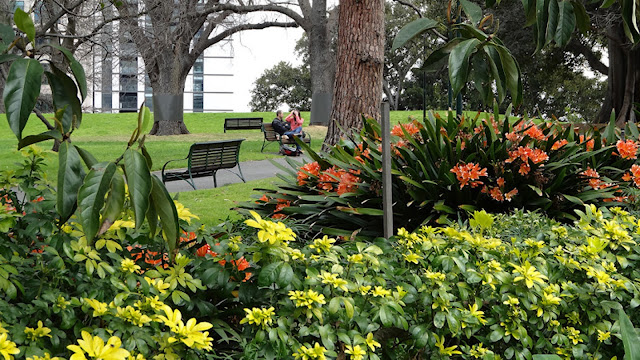 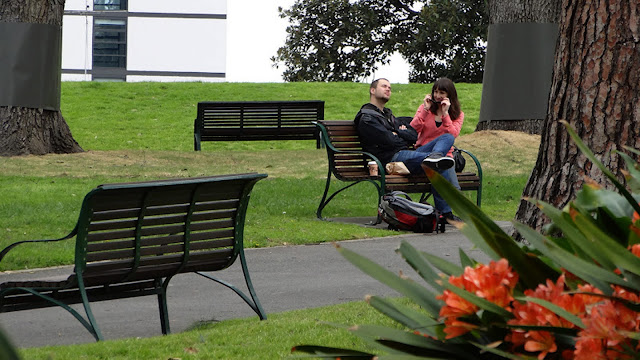 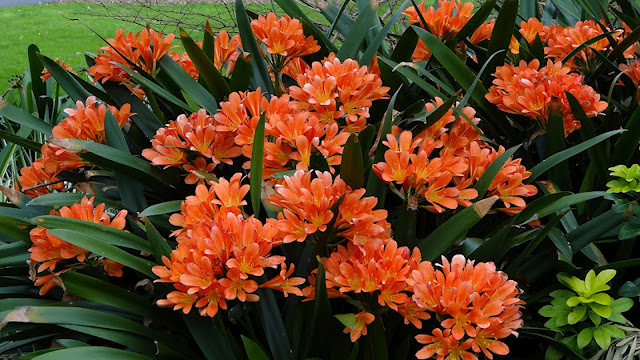 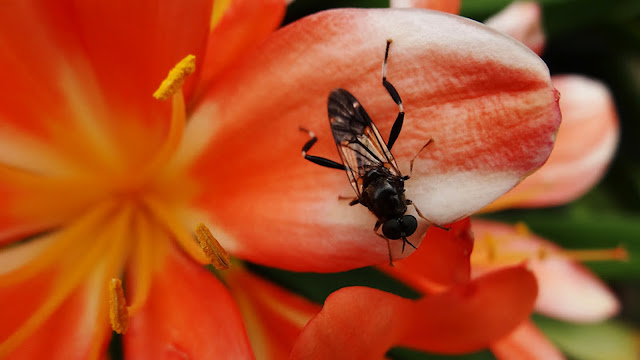 Attractive, dense ferny foliage makes Polemonium pulcherrimum 'Blue Dove' (also known as Jacob's ladder) a valuable plant for all year round interest in the garden. As an added bonus loose sprays of open bell shaped flowers in a soft shade of blue can appear from spring right through to and including autumn. Its 'lacy' appearance makes it a useful plant for softening hard lines and edges created by rocks, garden edging or paving.

Polemonium is a genus comprising of around 30 species of mostly perennial herbs which are native to regions of North and Central America, Europe and Asia. An excellent plant for general garden use and suitable for most colour schemes. 'Blue Dove' looks particularly at home in woodland type settings or in the cottage garden. It may be grown in semi shade although this may decrease flower production. This, however, is not necessarily a reason to avoid planting it in such locations as the attractive foliage alone will lend a visual appeal to these often difficult landscaping zones. To accent the foliage further create a foil of foliage behind it using larger, broader leafed plants or those with tall slender foliage such as that of Irises. 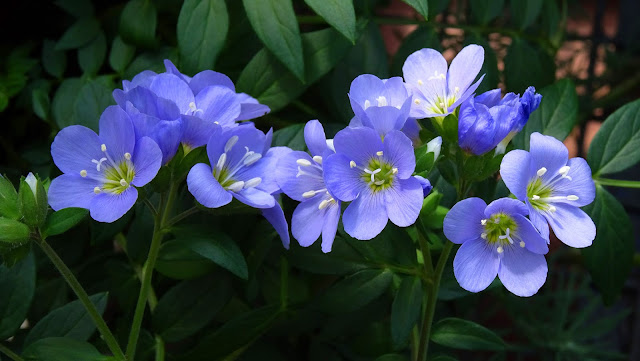 Saint-Raphaël (Occitan: Sant Rafèu) is a commune in the Var department in the Provence-Alpes-Côte d'Azur region in southeastern France. Immediately to the west of Saint-Raphaël lies another, older, town called Fréjus, and together they form an urban agglomeration known as Fréjus Saint-Raphaël. The Var lies in the region called Provence-Alpes-Côte d'Azur, often abbreviated to PACA. In the second half of the nineteenth century the township came under the influence of mayor Felix Martin and writer Alphonse Karr, and owing to their efforts and its beneficial climate the commune developed into a seaside resort popular with artists, sportsmen and politicians. It is the headquarters of the Fréjus Saint-Raphaël canton, which is the economic and cultural centre of eastern Var and lies in the arrondissement of Draguignan. Its inhabitants are called Raphaëlois in French generally, or Rafelencs in Provençal Occitan.

Saint-Raphaël is located at the extreme eastern end of the Var, along the border with the adjacent département of Alpes-Maritimes, which occupies the far south-eastern corner of France at the frontier with Italy. The commune has a total of thirty-six kilometres of Mediterranean coastline, owing mainly to the many coves and creeks formed between the natural region of the Esterel Massif and the sea. This places it second only to Marseilles, with fifty-seven kilometres of coastline. The commune is 89.59 km2 in extent. It is almost completely urbanised in the west, but includes over 60 km2 of protected areas of natural forest and the Esterel mountains. Saint-Raphaël has four large sandy beaches: One near the city centre, called the Veillat; one at Boulouris; one at Le Dramont, and the fourth at Agay. There are two smaller ones at Anthéor and Le Trayas. 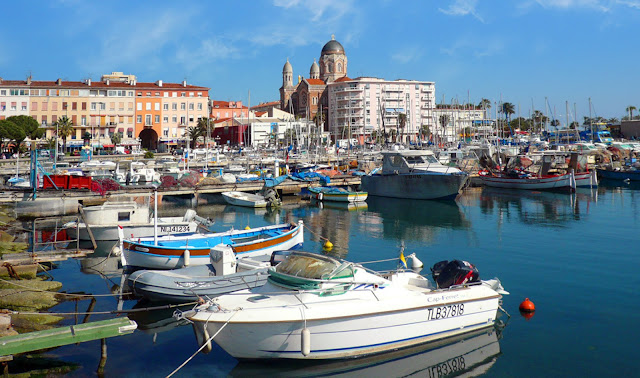