A mosaic is a piece of art or image made from the assembling of small pieces of coloured glass, stone, or other materials. It is often used in decorative art or as interior decoration. Most mosaics are made of small, flat, roughly square, pieces of stone or glass of different colours, known as tesserae. Some, especially floor mosaics, are made of small rounded pieces of stone, and called "pebble mosaics".

Christian basilicas from the 4th century onwards were decorated with wall and ceiling mosaics. Mosaic art flourished in the Byzantine Empire from the 6th to the 15th centuries, reaching its acme then. That tradition was adopted by the Norman Kingdom of Sicily in the 12th century, by the eastern-influenced Republic of Venice, and among the Rus in Ukraine. Mosaic fell out of fashion in the Renaissance, though artists like Raphael continued to practise the old technique. Roman and Byzantine influence led Jewish artists to decorate 5th and 6th century synagogues in the Middle East with floor mosaics.

The two byzantine mosaics of the Archangel Michael and Archangel Gabriel are from the Church of St Dionysius in Athens, Greece, and they are separated by a detail of a decorative background pattern from the tomb of Galla Placidia in Ravenna, Italy. Another Byzantine mosaic can be seen here, found in the Byzantine Church of Hagia Sophia in Istanbul. 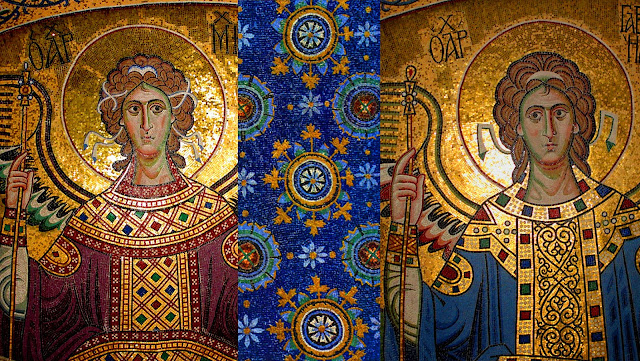 Posted by Melbourne Australia Photos at 06:23:00