Coimbra is a city and a municipality in Portugal. The population at the 2011 census was 143,397, in an area of 319.40 square kilometres. The fourth-largest urban centre in Portugal (after Lisbon, Porto and Braga), it is the largest city of the district of Coimbra, the Centro region and the Baixo Mondego subregion. About 460,000 people live in the Região de Coimbra, comprising 19 municipalities and extending into an area 4,336 square kilometres.

Among the many archaeological structures dating back to the Roman era, when Coimbra was the settlement of Aeminium, are its well-preserved aqueduct and cryptoporticus. Similarly, buildings from the period when Coimbra was the capital of Portugal (from 1131 to 1255) still remain. During the Late Middle Ages, with its decline as the political centre of the Kingdom of Portugal, Coimbra began to evolve into a major cultural centre. This was in large part helped by the establishment the University of Coimbra in 1290, the oldest academic institution in the Portuguese-speaking world.

Apart from attracting many European and international students, the university is visited by many tourists for its monuments and history. Its historical buildings were classified as a World Heritage site by UNESCO in 2013: "Coimbra offers an outstanding example of an integrated university city with a specific urban typology as well as its own ceremonial and cultural traditions that have been kept alive through the ages." 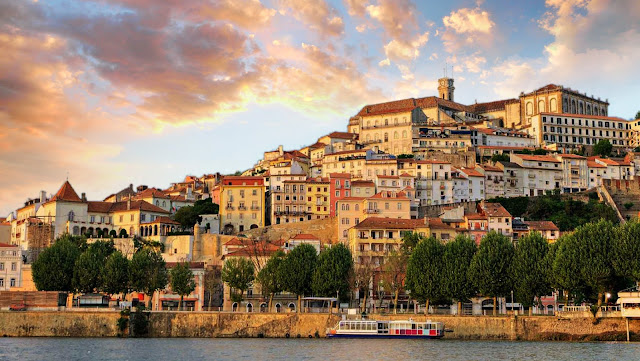 And here is the immortal Amalia Rodrigues singing the famous Portuguese fado "Coimbra".

Posted by Melbourne Australia Photos at 05:23:00