Bury St Edmunds,  commonly referred to as Bury, is a historic market town and civil parish in the in St Edmundsbury district, in the county of Suffolk, England. Bury St Edmunds Abbey is near the town centre. Bury is the seat of the Diocese of St Edmundsbury and Ipswich of the Church of England, with the episcopal see at St Edmundsbury Cathedral. The town, originally called Beodericsworth, was built on a grid pattern by Abbot Baldwin around 1080. It is known for brewing and malting (Greene King brewery) and for a British Sugar processing factory, where Silver Spoon sugar is produced. The town is the cultural and retail centre for West Suffolk and tourism is a major part of the economy.

St James' parish church became St Edmundsbury Cathedral when the Diocese of St Edmundsbury and Ipswich was formed in 1914. The cathedral was extended with an eastern end in the 1960s. A new Gothic revival cathedral tower was built as part of a Millennium project running from 2000 to 2005. The opening for the tower took place in July 2005, and included a brass band concert and fireworks. Parts of the cathedral remain uncompleted, including the cloisters and some areas remain inaccessible to the public due to building work. The tower makes St Edmundsbury the only recently completed Anglican cathedral in the UK and was constructed using original fabrication techniques by six masons who placed the machine pre-cut stone individually as they arrived. 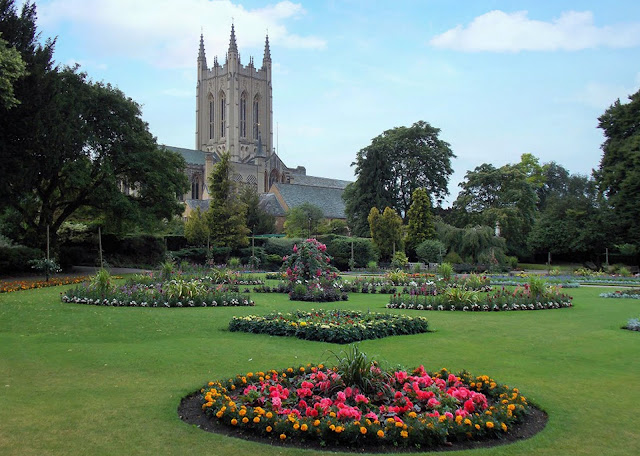 Posted by Melbourne Australia Photos at 03:22:00