Cymbidium, or boat orchids, is a genus of 52 evergreen species in the orchid family Orchidaceae. One of its first descriptions come from Olof Swartz in 1799. The name is derived from the Greek word kumbos, meaning 'hole, cavity'. It refers to the form of the base of the lip. The genus is abbreviated Cym in horticultural trade.
This genus is distributed in tropical and subtropical Asia (such as northern India, China, Japan, Malaysia, the Philippines, and Borneo) and northern Australia. The larger flowered species from which the large flowered hybrids are derived, grow at high altitudes. Cymbidiums became popular in Europe during the Victorian era. One feature that makes the plant so popular is the fact that it can survive during cold temperatures (as low as 7˚C).
This post is part of the Floral Friday Fotos meme. 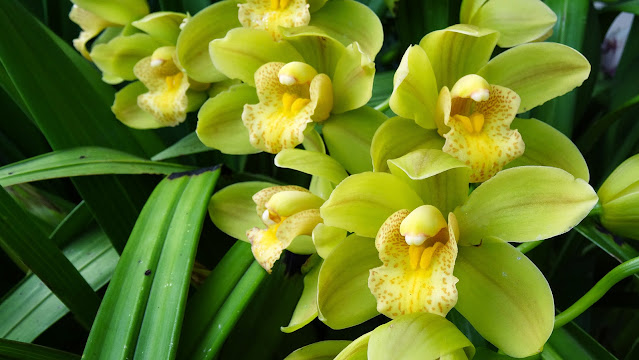 Posted by Melbourne Australia Photos at 06:02:00