Crassula ovata, commonly known as jade plant, friendship tree, lucky plant, money plant or money tree, is a succulent plant with small pink or white flowers. It is native to South Africa and Mozambique, and is common as a houseplant worldwide. Much of its popularity stems from the low levels of care needed; the jade plant requires little water and can survive in most indoor conditions. It is sometimes referred to as the money tree; however, Pachira aquatica also has this nickname.

The jade plant is an evergreen with thick branches. It has thick, shiny, smooth leaves that grow in opposing pairs along the branches. Leaves are a rich jade green, although some may appear to be more of a yellow-green. Some varieties may develop a red tinge on the edges of leaves when exposed to high levels of sunlight. New stem growth is the same colour and texture as the leaves. Although becoming brown and appearing woody with age, stems never become true lignified tissue, remaining succulent and fleshy throughout the plant's life. Under the right conditions, they may produce small white or pink, star-like shaped flowers in the Autumn/early Winter. Numerous varieties and cultivars have been selected, of which C. ovata 'Hummel's Sunset' has gained the Royal Horticultural Society's Award of Garden Merit.

In Melbourne this is a common garden plant, which becomes a substantial bush and it will invariably bloom spectacularly in early Winter. The plant below is in our garden. 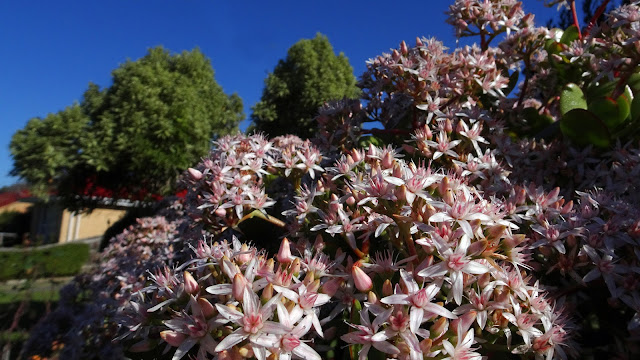