Erysimum cheiri syn. Cheiranthus cheiri (common name "wallflower") is a species of flowering plant in the family Brassicaceae (Cruciferae), native to Europe but widespread as an introduced species elsewhere. It is also widely cultivated as a garden plant. This is a herbaceous perennial, often grown as a biennial, with one or more highly branching stems reaching heights of 15–80 cm.

The leaves are generally narrow and pointed and may be up to 20 cm long. The top of the stem is occupied by a club-shaped inflorescence of strongly scented flowers. Each flower has purplish-green sepals and rounded petals which are two to three cm long and in shades of bright yellows to reds and purples. The flowers fall away to leave long fruits which are narrow, hairy siliques several cm in length.

This is a popular ornamental plant, widely cultivated for its abundant, fragrant flowers in spring. Many cultivars have been developed, in shades of yellow, orange, red, maroon, purple, brown, white and cream. It associates well in bedding schemes with other spring flowers such as tulips and forget-me-nots. It is usually grown as a biennial, sown one year to flower the next, and then discarded. This is partly because of its tendency to grow spindly and leggy during its second year, but more importantly its susceptibility to infections such as clubroot. 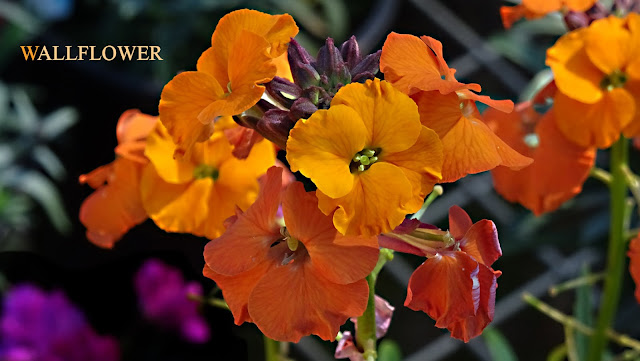