Solanum nigrum, the European black nightshade or simply black nightshade or blackberry nightshade, is a species of flowering plant in the genus Solanum, native to Eurasia and introduced in the Americas, Australasia, and South Africa. Ripe berries and cooked leaves of edible strains are used as food in some locales, and plant parts are used as a traditional medicine. A tendency exists in literature to incorrectly refer to many of the other "black nightshade" species as "Solanum nigrum".
Solanum nigrum has been recorded from deposits of the Palaeolithic and Mesolithic era of ancient Britain and it is suggested by the botanist and ecologist Edward Salisbury that it was part of the native flora there before Neolithic agriculture emerged. The species was mentioned by Pliny the Elder in the first century AD and by the great herbalists, including Dioscorides. In 1753, Carl Linnaeus described six varieties of Solanum nigrum in Species Plantarum.
This post is part of the Floral Friday Fotos meme. 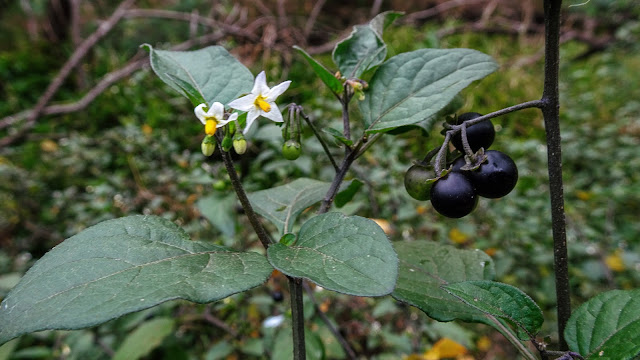