Methoni (Greek: Μεθώνη, Italian: Modone) is a village and a former municipality in Messenia, Peloponnese, Greece. Since the 2011 local government reform it is part of the municipality Pylos-Nestoras, of which it is a municipal unit. Its name may be derived from Mothona, a mythical rock. It is located 11 km south of Pylos and 11 km west of Foinikounta. The town is also known by the Italian name Modone, as it was called by the Venetians. Its economy is dominated by tourism, attracted by its beaches (including Tapia, Kokkinia and Kritika) and its historical castle.

Methoni has been identified as the city Pedasus, that Homer mentions under the name “ampeloessa” (of vine leaves), as the last of the seven “evnaiomena ptoliethra”, that Agamemnon offers Achilles in order to subdue his rage. Pausanias knew the city as Mothone, named after either the daughter of Oeneus or after the rock Mothon, which protects the harbour, and mentioned a temple to Athena Anemotis there. It was an important city in Ancient Greek, Roman and Byzantine times.

The Venetians had their eye on Methoni since the 12th century, due to its location on the route from Venice to the Eastern markets. In 1125, they launched an attack against pirates, who had captured some Venetian traders on their way home from the east, and who were inhabiting Methoni at that time. The Venetians took over the town in the aftermath of the Fourth Crusade, and secured recognition from the neighbouring Principality of Achaea through the Treaty of Sapienza (1209). A Roman Catholic bishop was installed in the local see.

The Venetians fortified Methoni, which developed into an important trade centre with great prosperity. Methoni became the important middle station between Venice and the Holy Lands, where every traveler stopped on their way to the East. A pilgrim who went by in 1484 admired its strong walls, the deep moats and the fortified towers. Nowadays the walls of the fortress, even though in ruins, continue to be impressive. The castle of Methoni occupies the whole area of the cape and the southwestern coast to the small islet that has also been fortified with an octagonal tower and is protected by the sea on its three sides. Its north part, the one that looks to land, is covered by a heavily fortified acropolis. A deep moat separates the castle from the land and communication was achieved by a wooden bridge. The Venetians built on the ancient battlements and added on and repaired it during both periods that they occupied the castle.

The castle of Methoni rises deserted and isolated today. When the winter winds hit its walls the locals say that you can hear the screams of the prisoners and the unjustly killed in the dungeons. 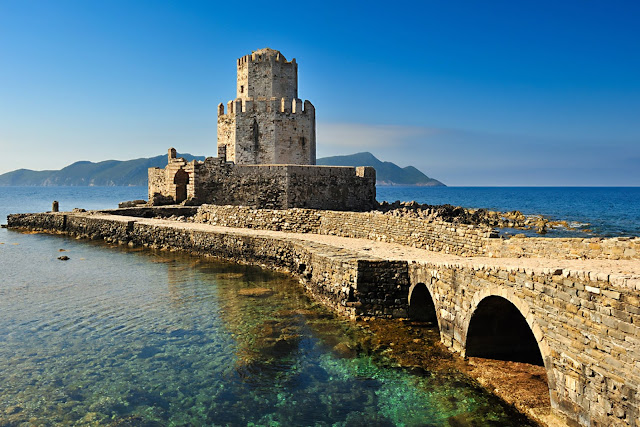 Posted by Melbourne Australia Photos at 05:13:00