Anigozanthos is a small genus of Australian plants in the Bloodwort family Haemodoraceae. The 11 species and several subspecies are commonly known as kangaroo paw and catspaw depending on the shape of their flowers. A further species, previously identified as Anigozanthos fuliginosus and commonly known as the black kangaroo paw, has been transferred to its own monotypic genus and is now known as Macropidia fuliginosa.
The genus was first named by Jacques Labillardière in his work, Relation du Voyage à la Recherche de la Pérouse, issued in 1800. The French botanist collected and described the type species, Anigozanthus rufus, during the d'Entrecasteaux expedition's visit to Southwest Australia in 1792. In recent years a number of numerous hybrids and cultivars have been developed. Kangaroo paws are much in demand as house plants and as cut flowers.
This post is part of the Floral Friday Fotos meme. 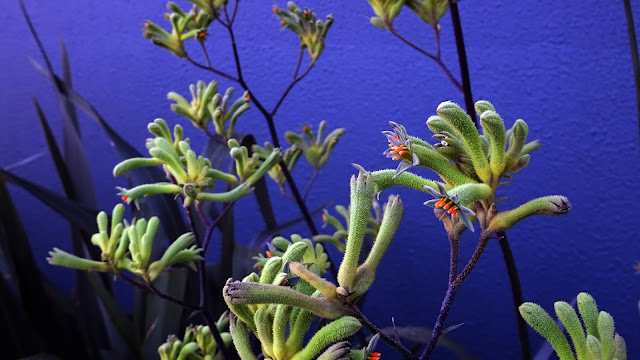