Hobart is the state capital and most populous city of the Australian island state of Tasmania. Founded in 1804 as a penal colony, Hobart is Australia's second oldest capital city after Sydney. In 2009, the city had a greater area population of approximately 212,019. A resident of Hobart is known as a "Hobartian".

The city is located in the state's south-east on the estuary of the Derwent River. The skyline is dominated by Mount Wellington at 1,271 metres high. The city is the financial and administrative heart of Tasmania, also serving as the home port for both Australian and French Antarctic operations. Hobart was named Australia's 6th most sustainable city, by the Australian Conservation Foundation in 2010. For economic and social innovation, Hobart was the 11th placed in Australia in 2009, and listed as an innovation influencer city in the Innovation Cities Global Index scoring equal with Reykjavik, Katowice and Casablanca by 2thinknow.

Hobart supports a huge tourist industry. Visitors come to the city to explore its historic inner suburbs and nationally acclaimed restaurants and cafes, as well as its vibrant music and nightlife culture. Australia's first legal casino was the 17-storey Wrest Point Hotel Casino in Sandy Bay, opened in 1973. Tourists also come to visit the massive weekly market in Salamanca Place, as well as to use the city as a base from which to explore the rest of Tasmania. 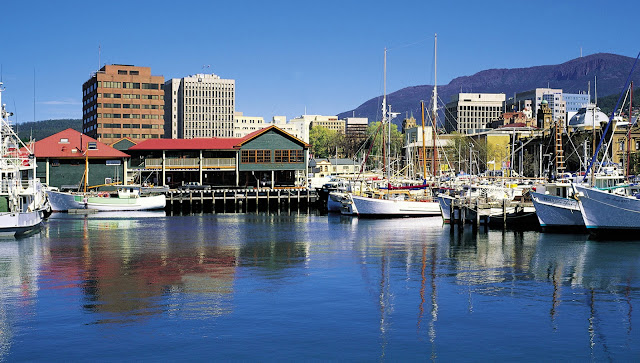 Posted by Melbourne Australia Photos at 07:00:00