Vipera berus, the common European viper or common European adder, is a venomous snake that is extremely widespread and can be found throughout most of Western Europe and as far as East Asia. Known by a host of common names including common adder and common viper, adders have been the subject of much folklore in Britain and other European countries. They are not regarded as especially dangerous; the snake is not aggressive and usually bites only when alarmed or disturbed. Bites can be very painful, but are seldom fatal.

The specific name, berus, is New Latin and was at one time used to refer to a snake, possibly the grass snake, Natrix natrix. The common adder is found in different terrains, habitat complexity being essential for different aspects of its behaviour. It feeds on small mammals, birds, lizards, and amphibians, and in some cases on spiders, worms, and insects.

The common viper, like most other vipers, is ovoviviparous. Females breed once every two or three years, with litters usually being born in late summer to early autumn in the Northern Hemisphere. Litters range in size from three to 20 with young staying with their mothers for a few days. Adults grow to a total length (including tail) of 60 to 90 cm and a mass of 50 to 180 g. Three subspecies are recognised, and the snake is not considered to be threatened, though it is protected in some countries. 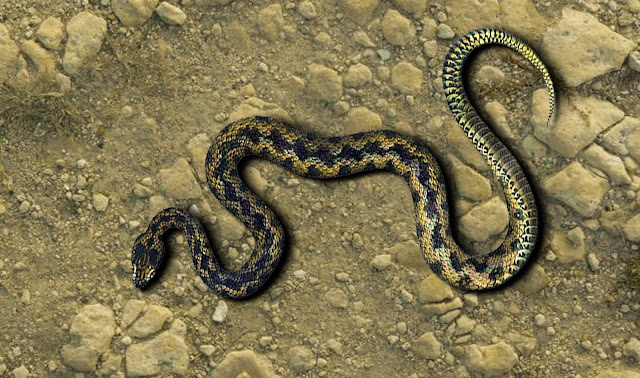 Posted by Melbourne Australia Photos at 06:35:00