Paphos (Greek: Πάφος [Pafos]; Turkish: Baf) is a coastal city in the southwest of Cyprus and the capital of Paphos District. In antiquity, two locations were called Paphos: Old Paphos, today at Kouklia, and New Paphos. The current city of Paphos lies on the Mediterranean coast, about 50 km west of Limassol (the biggest port on the island), which has an A6 highway connection. Paphos International Airport is the country’s second-largest airport. The city has a subtropical-Mediterranean climate, with the mildest temperatures on the island.

Paphos Castle (seen above) is located on the edge of Paphos harbour. It was originally built as a Byzantine fort to protect the harbour. It was then rebuilt by the Lusignans in the thirteenth century after being destroyed in the earthquake of 1222. In 1570 it was dismantled by the Venetians. After capturing the island, the Ottomans restored and strengthened it.

Throughout the ages it has seen many uses. It has served as a fortress, a prison and even a warehouse for salt during the British occupation of the island. More recently the castle serves as a backdrop to the annual open air Paphos cultural festival, which takes place in September. It was declared a listed building in 1935 and represents one of the most distinctive landmarks of the city of Paphos. Several archaeological excavations have taken place to investigate its past. 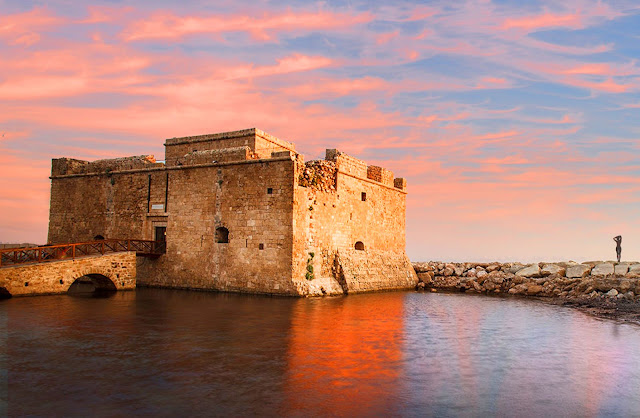 Posted by Melbourne Australia Photos at 03:44:00