A popular house plant, Streptocarpus, is an Afrotropical genus of flowering plants in the family Gesneriaceae (the Gesneriads). The genus is native to Afromontane biotopes from central, eastern and southern Africa, including Madagascar. The flowers are five-petalled, salverform tubes, almost orchid-like in appearance, and hover or arch over the plant. In the wild, species can be found growing on shaded rocky hillsides or cliffs, on the ground, in rock crevices, and almost anywhere the seed can germinate and grow.

For the home, there are now many hybrids of various colours and forms available. The genus is defined by having a spirally twisted fruit (from Greek via Latin, where strepto = twisted, carpus = fruit - Greek: Στρεπτόκαρπος), although this character is also found in some other Old World genera of Gesneriaceae. Although generally referred to simply as "Streptocarpus", or "Streps", the common name for subgenus Streptocarpus is "Cape Primrose", referring to the nativity of several species to South Africa and their superficial resemblance to the genus Primula. The common name for subgenus Streptocarpella is "Nodding Violet".

There are a few odd Asian species of Streptocarpus that however do not belong in the genus. Molecular systematics has shown conclusively that they are not true Streptocarpus and should be placed in another genus. DNA studies have shown that, despite not having a twisted fruit, the genus Saintpaulia (African Violets) evolved from within the Tanzanian Streptocarpus subgenus Streptocarpella. This particular hybrid with the striking dark blue flowers is "Anderson's Crows' Wings". 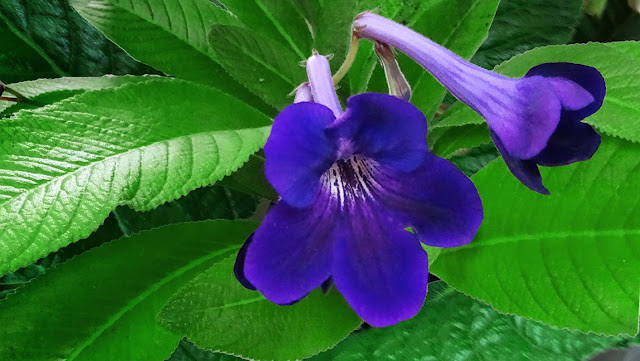 Posted by Melbourne Australia Photos at 05:39:00