Kolkata (formerly Calcutta) is the capital of the Indian state of West Bengal. Located on the east bank of the Hooghly River, it is the principal commercial, cultural, and educational centre of East India, while the Port of Kolkata is India’s oldest operating port and its sole major riverine port. In 2011, the city had population of 4.5 million, while the population of the city and its suburbs was 14.1 million, making it the third-most populous metropolitan area in India. In 2008 its gross domestic product (adjusted for purchasing power parity) was estimated to be US$104 billion, which was the third highest among Indian cities, behind Mumbai and Delhi. As a growing city in a developing country, Kolkata has pollution, traffic congestion, poverty, overcrowding, and other problems.

The Victoria Memorial is a large marble building in Kolkata, which was built between 1906 and 1921 after a proposal by Lord Curzon. It is dedicated to the memory of Queen Victoria (1819–1901) and is now a museum and tourist destination under the auspices of the Ministry of Culture. The Memorial lies on the Maidan (grounds) by the bank of the Hooghly River, near Jawaharlal Nehru Road. The memorial was funded by many Indian states, individuals of the British Raj and the British government in London. The princes and people of India responded generously to Curzon’s appeal for funds and the total cost of construction of this monument was entirely derived from their voluntary subscriptions.

The Victoria Memorial’s architect was William Emerson (1843–1924), president of the Royal Institute of British Architects. The design is in the Indo-Saracenic revivalist style. This style uses a mixture of British and Mughal elements as well as Venetian, Egyptian, Deccani and Islamic architectural influences. The building is 103 m by 69 m and rises to a height of 56 m. It is constructed of white Makrana marble. The gardens of the Victoria Memorial were designed by Lord Redesdale and David Prain. Emerson’s assistant, Vincent J. Esch designed the bridge of the north aspect and the garden gates. 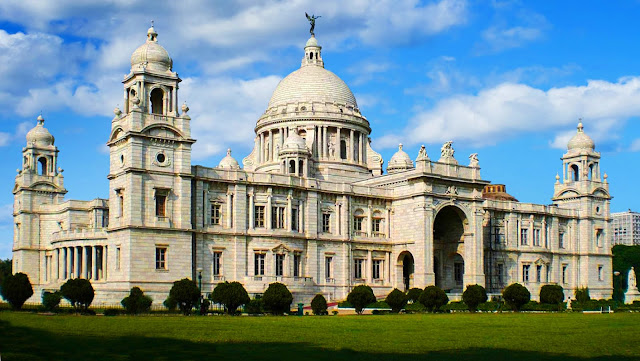