Catania is well known for its historical earthquakes, having been destroyed by catastrophic earthquakes in 1169 and 1693, and for several volcanic eruptions from the neighbouring Mount Etna, the most violent of which was in 1669.

Catania has had a long and eventful history, having been founded in the 8th century BC. In 1434, the first university in Sicily was founded in the city. In the 14th century and into the Renaissance period, Catania was one of Italy's most important cultural, artistic and political centres. The city has a rich culture and history, hosting many museums, restaurants, churches, parks and theatres. Catania is well known for its street food.

The opera composer Vincenzo Bellini (1801 – 1835) was born in Catania, and a museum exists at his birthplace. The Teatro Massimo "Vincenzo Bellini" (in the photo below), which opened in 1890, is named after the composer. The opera house presents a variety of operas through a season, which run from December to May, many of which are the work of Bellini. 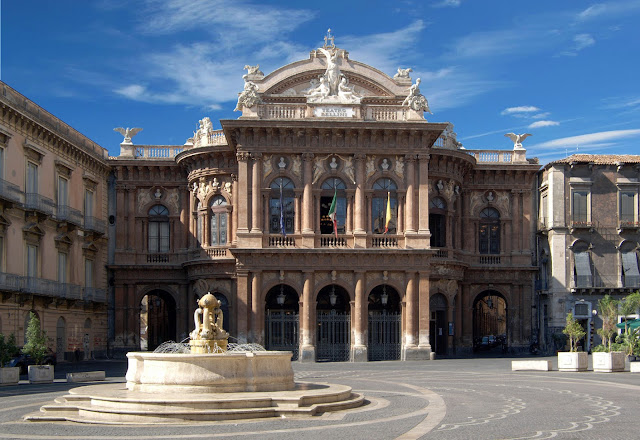 Posted by Melbourne Australia Photos at 05:59:00