Grevillea robusta, commonly known as the southern silky oak or silky oak, or Australian silver oak, is the largest species in the genus Grevillea of the family Proteaceae. It is not closely related to the true oaks, Quercus. It is a native of eastern coastal Australia, in riverine, subtropical and dry rainforest environments receiving more than 1,000 mm per year of average rainfall.

It is a fast-growing evergreen tree, between 18–35 m tall, with dark green delicately dented bipinnatifid leaves reminiscent of a fern frond. It is the largest plant in the Grevillea genus, the trunk reaching diameter in excess of 1 m. The leaves are generally 15–30 cm long with greyish white or rusty undersides. Its flowers are golden-orange bottlebrush-like blooms, between 8–15 cm long, in the spring, on a 2–3 cm long stem and are used for honey production. Native birds (like the Rainbow Lorikeet here) feed on the nectar.

Like others of its genus, the flowers have no petals, instead they have a long calyx that splits into 4 lobes. The seeds mature in late winter to early spring, fruiting on dark brown leathery dehiscent follicles, about 2 cm long, with one or two flat, winged seeds. Before the advent of aluminium, the timber from this tree was widely used for external window joinery as it is resistant to rotting. It was also popular for making furniture. There are severe restrictions on the harvesting of this tree now as the number of trees became depleted. Silky Oak is a valuable timber and was one of Australia’s best known cabinet timbers.It is the best tree which can be used for fencing and it is one of the fastest growing trees. 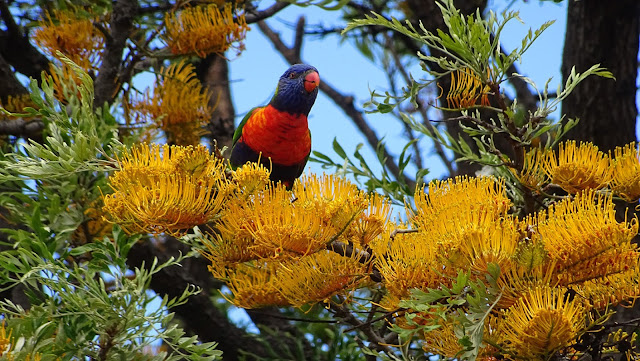 Posted by Melbourne Australia Photos at 03:27:00