Wave Rock is a natural rock formation that is shaped like a tall breaking ocean wave. The “wave” is about 14 m high and around 110 m long. It forms the north side of a solitary hill, which is known as “Hyden Rock”. This hill, which is a granite inselberg, lies about 3 km east of the small town of Hyden and 296 km east-southeast of Perth, Western Australia.

Wave Rock and Hyden Rock are part of a 160 ha nature reserve, Hyden Wildlife Park. A wall lies above Wave Rock about halfway up Hyden Rock and follows the contours of the wall. It collects and funnels rainwater to a storage dam. The wall and dam were constructed in December 1928 by the Public Works Department for the original settlers of East Karlgarin District. Both were renovated in 1951 to increase water capacity for the Hyden Township. Such walls are common on many similar rocks in the Wheatbelt.

Wave Rock has cultural significance to the indigenous Ballardong people. Local tribes believed that the rock was a creation of the Rainbow Serpent, and was created in her wake by dragging her swollen body over the land after she had consumed all of the water in the land. They respected this area as an icon of cultural learning; a moral from this Dreamtime tale was to be remembered for life. More than 140,000 tourists visit Wave Rock every year. 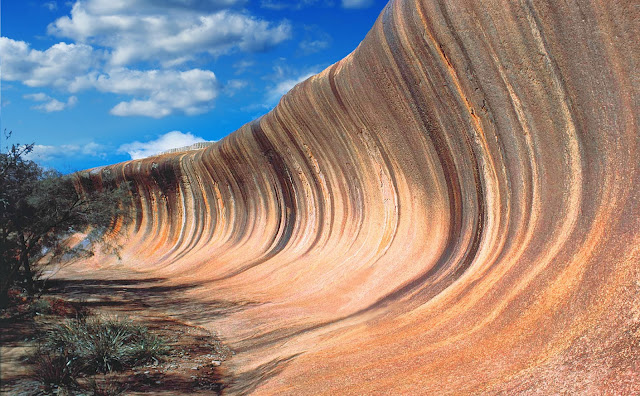 Posted by Melbourne Australia Photos at 06:08:00