Buddleja commonly known as the butterfly bush is a genus comprising over 100 species of flowering plants endemic to Asia, Africa, and the Americas, within the Buddlejaceae family. The generic name bestowed by Linnaeus posthumously honoured the Reverend Adam Buddle (1662–1715), a botanist and rector in Essex, England, at the suggestion of Dr. William Houstoun. Houstoun sent the first plants to become known to science as Buddleja (B. americana) to England from the Caribbean about 15 years after Buddle's death.
As garden shrubs Buddleja is essentially a 20th-century plant, with the exception of B. globosa which was introduced to Britain from southern Chile in 1774 and disseminated from the nursery of Lee and Kennedy, Hammersmith. Several species are popular garden plants, the species are commonly known as 'butterfly bushes' owing to their attractiveness to butterflies, and have become staples of the modern butterfly garden; they are also attractive to bees and moths. The most popular cultivated species is Buddleja davidii from central China, named for the French Basque missionary and naturalist Père Armand David.
This bush is flowering prematurely, misled perhaps by the fine, warm days we enjoyed before the cold, wet, stormy, wintry front that hit us two days ago.
This post is part of the Floral Friday Fotos meme 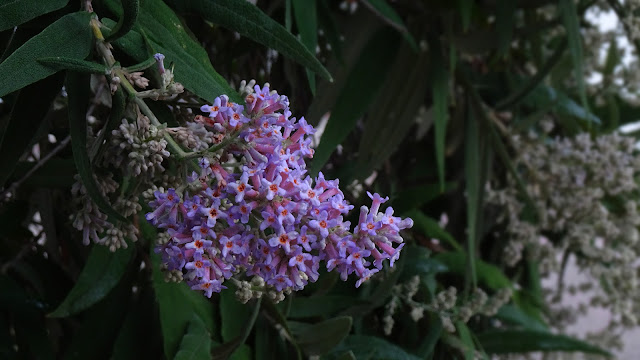