Chayote (Sechium edule) is an edible plant belonging to the gourd family Cucurbitaceae, along with melons, cucumbers and squash. Globally it is known by many names including christophene or christophine,cho-cho, pear squash, vegetable pear, chouchoute, choko, etc. Chayote is originally native to Mexico where it grows abundantly and has little commercial value. It has been introduced as a crop worldwide.

Chayote was one of the many foods introduced to Europe by early explorers, who brought back a wide assortment of botanical samples. The Age of Conquest also spread the plant south from Mexico, ultimately causing it to be integrated into the cuisine of many other Latin American nations. The chayote fruit is used in mostly cooked forms. When cooked, chayote is usually handled like summer squash, it is generally lightly cooked to retain the crisp flavour.

Though rare and often regarded as especially unpalatable and tough in texture, raw chayote may be added to salads or salsas, most often marinated with lemon or lime juice. Whether raw or cooked, chayote is a good source of vitamin C. Although most people are familiar only with the fruit as being edible, the root, stem, seeds and leaves are edible as well. The tubers of the plant are eaten like potatoes and other root vegetables, while the shoots and leaves are often consumed in salads and stir fries, especially in Asia.

Like other members of the gourd family, such as cucumbers, melons, and squash, chayote has a sprawling habit, and it should only be planted if there is plenty of room in the garden. The roots are also highly susceptible to rot, especially in containers, and the plant in general is finicky to grow. However, in Australia and New Zealand, it is an easily grown yard or garden plant, set on a chicken wire support or strung against a fence. 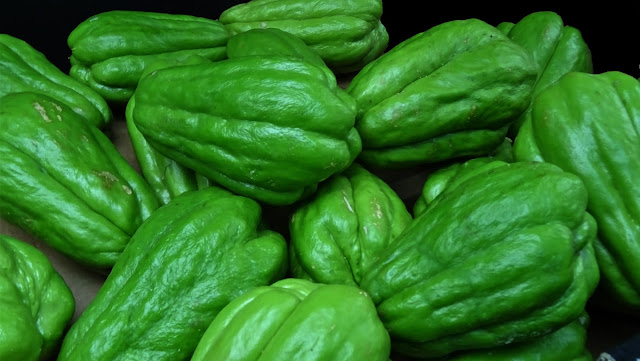 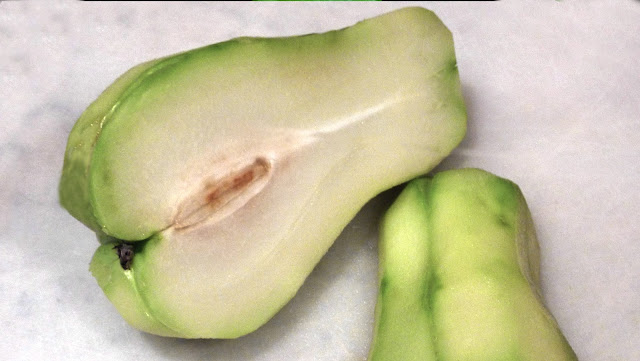 I appreciate your comments, and please add a link back to this page from your own Friday Greens blog post.
The meme is only as successful as you make it be!
Please add your own GREEN post using the Linky tool below:

Posted by Melbourne Australia Photos at 07:35:00