Hyacinthus is a small genus of bulbous flowering plants in the family Asparagaceae, subfamily Scilloideae. Plants are commonly called hyacinths. Hyacinthus is native to the eastern Mediterranean (from south Turkey to northern Israel), north-east Iran, and Turkmenistan.

Some authorities place H. litwonowii and H. transcaspicus in the related genus Hyacinthella, which would make Hyacinthus a monotypic genus. The Dutch, or Common Hyacinth of house and garden culture (H. orientalis, native to southwest Asia) was so popular in the 18th century that over 2,000 cultivars were cultivated in the Netherlands, its chief commercial producer. This hyacinth has a single dense spike of fragrant flowers in shades of red, blue, white, orange, pink, violet, or yellow. A form of the common hyacinth is the less hardy and smaller blue- or white-petalled Roman hyacinth of florists. These flowers should have indirect sunlight and are to be moderately watered.

Several types of brodiea, squill, and other plants that were formerly classified in the lily family and have flower clusters borne along the stalk also have common names with hyacinth in them. Hyacinths should also not be confused with the genus Muscari, which are commonly known as grape hyacinths.

Hyacinths are sometimes associated with rebirth. The Hyacinth flower is used in the Haftseen table setting for the Persian New Year celebration Norouz held during the Spring Equinox. Hyacinth bulbs are poisonous; they contain oxalic acid. Handling hyacinth bulbs can cause mild irritation to people with sensitive skin. Protective gloves may be worn to avoid irritation. 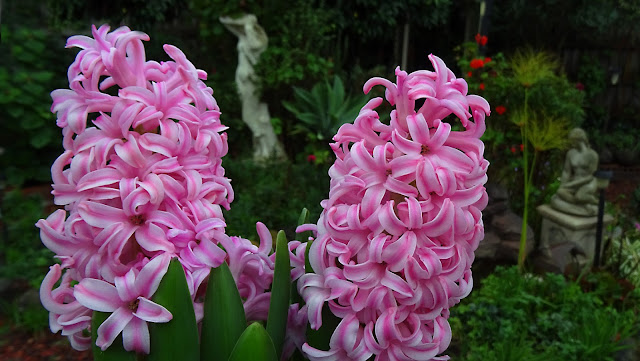