Portofino is an Italian fishing village and vacation resort famous for its picturesque harbour and historical association with celebrity and artistic visitors. It is a comune located in the Metropolitan City of Genoa on the Italian Riviera. The town is clustered around its small harbour, and is known for the colourfully painted buildings that line the shore.

According to Pliny the Elder, Portofino was founded by the Romans and named Portus Delphini, or Port of the Dolphin, because of the large number of dolphins that inhabited the Tigullian Gulf. The village is mentioned in a diploma from 986 by Adelaide of Italy, which assigned it to the nearby Abbey of San Fruttoso di Capodimonte.In 1171, together with the neighbouring Santa Margherita Ligure, it was included in Rapallo's commune jurisdiction. After 1229 it was part of the Republic of Genoa.

The town's natural harbour supported a fleet of fishing boats, but was somewhat too cramped to provide more than a temporary safe haven for the growing merchant marine of the Republic of Genoa. In 1409 Portofino was sold to the Republic of Florence by Charles VI of France, but when the latter was ousted from Genoa the Florentines gave it back. In the 15th century it was a fief of families such as the Fieschi, Spinola, Adorno, and Doria.

In 1815 it became part of the Kingdom of Sardinia and, from 1861, of the unified Kingdom of Italy. In the late 19th century, first British, then other Northern European aristocratic tourists began to visit Portofino, which they reached by horse and cart from Santa Margherita Ligure. Aubrey Herbert and Elizabeth von Arnim were amongst the more famous English people to make the area fashionable. Eventually more expatriates built expensive vacation houses, and by 1950 tourism had supplanted fishing as the town's chief industry, and the waterfront was a continuous ring of restaurants and cafés. 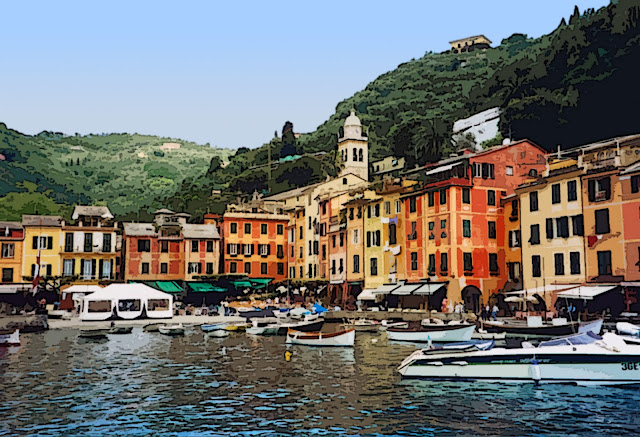 Posted by Melbourne Australia Photos at 05:46:00