Rhododendron is a genus of 500 to 900 species in the Ericaceae family and includes both of what we commonly call rhododendrons and azaleas. Most are evergreen but some are deciduous. Genus name comes from the Greek words rhodon meaning rose and dendron meaning tree. Transferred from the Greek name for Nerium oleander.
They originate mostly from the Northern Hemisphere with high concentrations in western China, the Himalayas and Myanmar (Burma). They are grown for their showy spring flowers and in the case of evergreen types for their attractive winter foliage. True rhododendrons have 10 stamens in a flower and azaleas have only 5. Much hybridisation has resulted in a great number of hybrid cultivars. Of note to gardeners in cool temperate areas are the large and small leaved evergreen rhododendrons and the evergreen and deciduous azaleas.
Evergreen azaleas develop as multi-stemmed plants from the ground and usually grow 3-5 feet tall. They retain their leaves throughout the year and are not as winter hardy as the deciduous azaleas. In cold winters flower buds may be frozen resulting in reduced or no flowering and foliage may winter burn (turn brown and be killed). Colour range is mostly from white to pink, red, lavender and purple.
'Conlec', commonly sold under the trade name of AUTUMN ROYALTY, is an evergreen azalea (Encore Series) that features large single purplish-pink flowers. It typically matures over time in an upright, dense, rounded form to 1.5 m tall and to 1.2 m wide. Large, open funnel-shaped flowers (to 10 cm diameter) bloom singly in early midseason (late April-May). A lesser repeat bloom may occur in late summer to fall. Matte green leaves (to 16 cm long) are evergreen. Parents are R. 'Georgia Giant' x R. oldhamii 'Fourth of July.' U. S. Plant Patent PP10,580 was issued on September 1, 1998.
This post is part of the Floral Friday Fotos meme 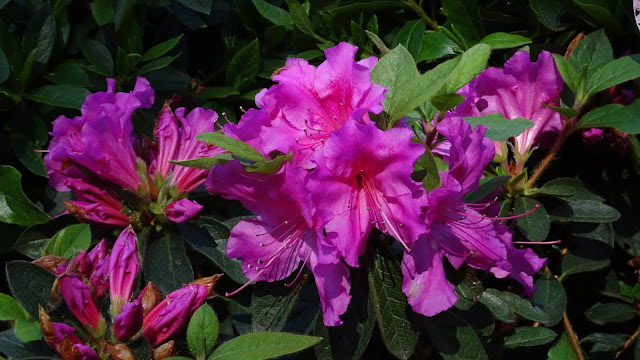