Hong Kong (Chinese: 香港), officially the Hong Kong Special Administrative Region of the People's Republic of China, is an autonomous territory on the eastern side of the Pearl River estuary in East Asia, south of the mainland Chinese province of Guangdong, and east of the former Portuguese colony and fellow special administrative region of Macau. With around 7.3 million Hongkongers of various nationalities in a territory of 1,104 km2, Hong Kong is the fourth-most densely populated region in the world.

Hong Kong was formerly a colony of the British Empire, after the perpetual cession of Hong Kong Island from Qing China at the conclusion of the First Opium War in 1842. The colony expanded to the Kowloon Peninsula in 1860, and further acquired a 99-year lease of the New Territories from 1898. Hong Kong was later occupied by Japan during the Second World War, until British control resumed in 1945. The territory was returned to China under the framework of the Sino-British Joint Declaration, signed by the United Kingdom and China in 1984 and marked with the transfer of sovereignty over Hong Kong in 1997, when it became a special administrative region of the People's Republic of China.

Under the principle of "one country, two systems", Hong Kong maintains a separate political and economic system apart from China. Except in military defence and foreign affairs, Hong Kong retains independent executive, legislative, and judiciary powers. Nevertheless, Hong Kong does directly develop relations with foreign states and international organisations in a broad range of "appropriate fields", being actively and independently involved in institutions such as the Asia-Pacific Economic Cooperation forum and the World Trade Organization.

Hong Kong is one of the world's most significant financial centres, holding the highest Financial Development Index score and consistently ranking as the world's most competitive and freest economic areas. As the seventh-largest trading entity in the world, its legal tender, the Hong Kong dollar, is the 13th-most traded currency. Hong Kong's tertiary sector dominated economy is characterised by competitive simple taxation and supported by its independent judiciary system.

Although the city boasts one of the highest per capita incomes in the world, it suffers from severe income inequality. Hong Kong features the most skyscrapers in the world, surrounding Victoria Harbour, which lies in the centre of the city's dense urban region. It has a very high Human Development Index ranking and the world's longest life expectancy. Over 90% of its population makes use of well-developed public transportation. Seasonal air pollution with origins from neighbouring industrial areas of mainland China, which adopts loose emissions standards, has resulted in a high level of atmospheric particulates in winter. 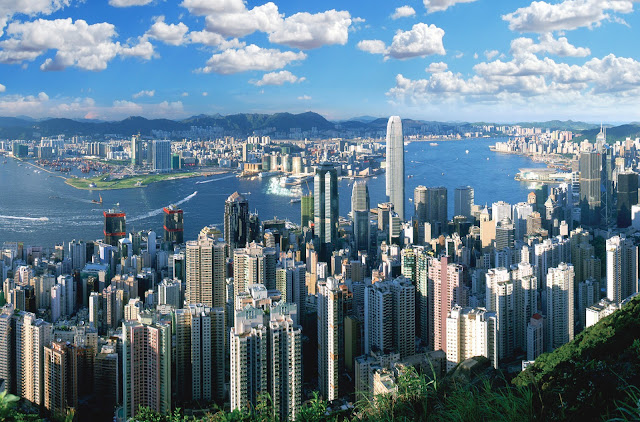