A samara (/səˈmɑːrə/, UK also: /ˈsæmər-/) is a winged achene, a type of fruit in which a flattened wing of fibrous, papery tissue develops from the ovary wall. A samara is a simple dry fruit and indehiscent (not opening along a seam). The shape of a samara enables the wind to carry the seed farther away than regular seeds from the parent tree, and is thus a form of anemochory. In some cases the seed is in the centre of the wing, as in the elms (genus Ulmus), the hoptree (Ptelea trifoliata), and the bushwillows (genus Combretum). In other cases the seed is on one side, with the wing extending to the other side, making the seed autorotate as it falls, as in the maples (genus Acer) and ash trees (genus Fraxinus).

A samara is sometimes called a key and is often referred to as a wingnut, helicopter or whirlybird, whirligig, polynose, or, in the north of England, a spinning jenny. During the autumn months, they are a popular source of amusement for children who enjoy tossing them in the air and watching them spin to the ground. Some species that normally produce paired samaras, such as Acer pseudoplatanus, also produce them in groups of 3 or 4. 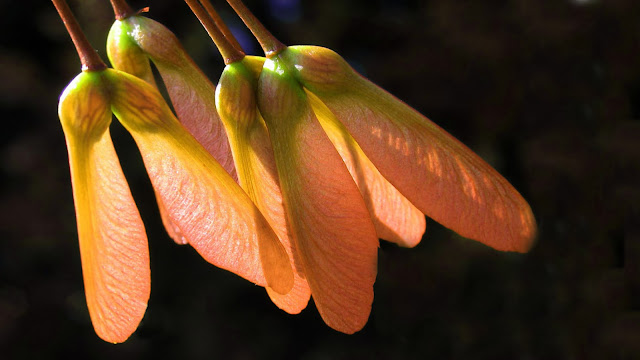 Posted by Melbourne Australia Photos at 06:44:00