Poros (Greek: Πόρος) is a small Greek island-pair in the southern part of the Saronic Gulf, about 58 km (31 nautical miles) south from Piraeus and separated from the Peloponnese by a 200 m wide sea channel, with the town of Galatas on the mainland across the strait. Its surface area is about 31 square kilometres and it has 3,780 inhabitants. The ancient name of Poros was Pogon.

Like other ports in the Saronic, it is a popular weekend destination for Athenian travellers. Poros consists of two islands: Sphairia (Greek: Σφαιρία), the southern part, which is of volcanic origin, where today's city is located, and Kalaureia (Greek: Καλαυρία), also Kalavria or Calauria (meaning 'gentle breeze'), the northern and largest part. A bridge connects the two islands over a narrow strait.

Poros is an island with rich vegetation. Much of the northern and far eastern/western sides of the island are bushy, whereas large areas of old pine forest are found in the south and center of the island. It has a good road network and adequate tourist infrastructure, which makes it a popular resort for short holidays. The town of Poros, with its neoclassical edifices, is built amphitheatrically on the slopes of a hill. Its most famous landmark is a clock tower, built in 1927. The Archaeological Museum of Poros, at Korizis Square, houses findings from the Sanctuary of Poseidon, from ancient Troizen, and from other archaeological sites nearby.

In the northern part of the island are the remains of the Sanctuary of Poseidon, the centre of the Kalaureian amphictyony. The exact date it was built is not known, although researchers estimate it to have been around 520 BC. The dimensions of the temple, which is of the Doric order, are 27.4×14.4 m. There are six columns on each short side and twelve on each long side. It was here that Demosthenes, the famous orator, poisoned himself with hemlock in 322 BC fleeing from the Macedonian Governor Antipatros.

Poros was the site of the first naval base in modern Greece, established in 1827 during the Greek War of Independence. Most of the activities of Poros naval base were moved to Salamis Naval Base in 1881. The site is still used today by the Hellenic Navy as a training centre for naval personnel. Though possessing no airport, Poros is easily accessible from Athens via ferry or hydrofoil. One can reach the island by car or bus from the adjacent mainland at Galatas. There is local bus service on the island from Poros harbour to the nearby towns of Neorio and Monastiri. 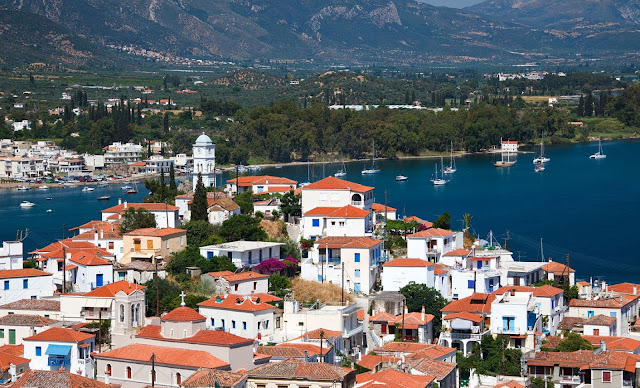