Mycenae (Greek: Μυκῆναι Mykēnai or Μυκήνη Mykēnē) is an archaeological site in Greece, located about 90 kilometres southwest of Athens, in the north-eastern Peloponnese. Argos is 11 kilometres to the south; Corinth, 48 kilometres to the north. From the hill on which the palace was located, one can see across the Argolid to the Saronic Gulf. In the second millennium BC, Mycenae was one of the major centres of Greek civilisation, a military stronghold which dominated much of southern Greece. The period of Greek history from about 1600 BC to about 1100 BC is called Mycenaean in reference to Mycenae. At its peak in 1350 BC, the citadel and lower town had a population of 30,000 and an area of 32 hectares.

The Lion Gate, shown below, was the main entrance of the Bronze Age citadel of Mycenae. It was erected during the 13th century BC in the northwest side of the acropolis and is named after the relief sculpture of two lionesses in a heraldic pose that stands above the entrance. The Lion Gate is the sole surviving monumental piece of Mycenaean sculpture, as well as the largest sculpture in the prehistoric Aegean.

The Lion Gate is a massive and imposing construction, standing 3.10 m  wide and 2.95 m  high at the threshold. It narrows as it rises, measuring 2.78 m below the lintel. The opening was closed by a double door mortised to a vertical beam that acted as a pivot around which the door revolved. The gate itself consists of two great monoliths capped with a huge lintel that measures 4.5×2.0×0.8 m. Above the lintel, the masonry courses form a corbelled arch, leaving an opening that lightens the weight carried by the lintel. This relieving triangle is a great limestone slab on which two confronted lionesses carved in high relief stand on either sides of a central pillar. The heads of the animals were fashioned separately and are missing. The pillar, specifically, is a Minoan-type column that is placed on top of an altar-like platform that the lionesses rest their front legs on.

Beyond the gate and inside the citadel was a covered court with a small chamber, which probably functioned as a guard post. On the right, adjacent to the wall, was a building that has been identified as a granary because of the pithoi (great earthenware jars) found there containing carbonised wheat. 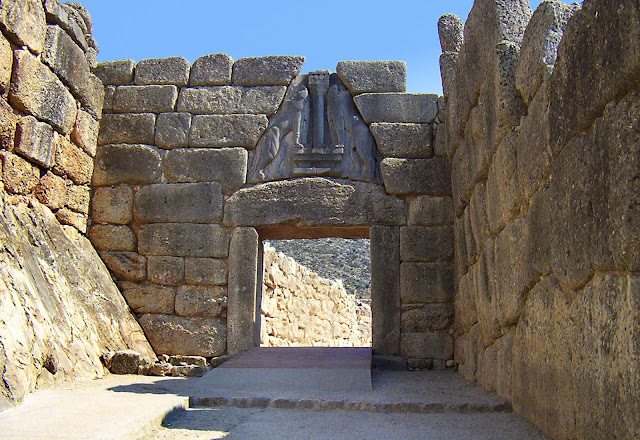