Liriodendron tulipifera (known as the tulip tree, American tulip tree, tuliptree, tulip poplar, whitewood, fiddle-tree, and yellow poplar) is the Western Hemisphere representative of the two-species genus Liriodendron, and the tallest eastern hardwood. It is native to eastern North America from Southern Ontario and Illinois eastward across southern New England and south to central Florida and Louisiana.

It can grow to more than 50 m in virgin cove forests of the Appalachian Mountains, often with no limbs until it reaches 25–30 m in height, making it a very valuable timber tree. It is fast-growing, without the common problems of weak wood strength and short lifespan often seen in fast-growing species. April marks the start of the flowering period in the southern USA; trees at the northern limit of cultivation begin to flower in June. Surprisingly, the flower-bearing branches make good cut flower displays.

The flowers are pale green or yellow (rarely white), with an orange band on the tepals; they yield large quantities of nectar. The tulip tree is the state tree of Indiana, Kentucky, and Tennessee. Tulip trees make magnificently shaped specimen trees, but are very large, growing to about 35 m in good soil. Liriodendron tulipifera has been introduced to many temperate parts of the world, at least as far north as Sykkylven, Norway. 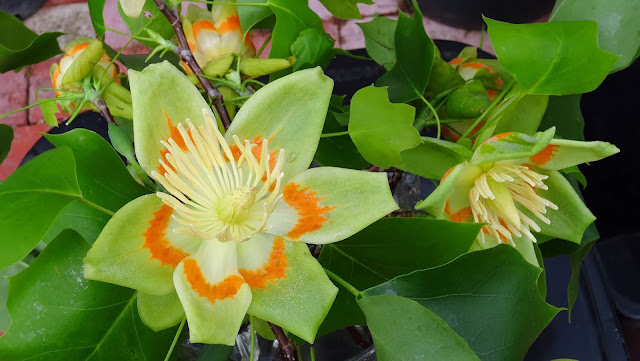