Iris is a genus of about 300 species of flowering plants with showy flowers. It takes its name from the ancient Greek goddess of the rainbow, Iris, referring to the wide variety of flower colours found among the many species. As well as being the scientific name, iris is also very widely used as a common name for all Iris species, though some plants called thus belong to other closely related genera. A common name for some species is 'flags', while the plants of the subgenus Scorpiris are widely known as 'junos', particularly in horticulture.

It is a popular garden flower and its blossoms provide wonderful splashes of colour in the Spring garden. The genus is widely distributed throughout the north temperate zone. Their habitats are varied, ranging from cold and montane regions to the grassy slopes, meadowlands and riverbanks of Europe, the Middle East and northern Africa, Asia and across North America. Irises are perennial herbs, growing from creeping rhizomes (rhizomatous irises) or, in drier climates, from bulbs (bulbous irises). They have long, erect flowering stems which may be simple or branched, solid or hollow, and flattened or have a circular cross-section. The rhizomatous species usually have 3–10 basal sword-shaped leaves growing in dense clumps. The bulbous species have cylindrical, basal leaves. 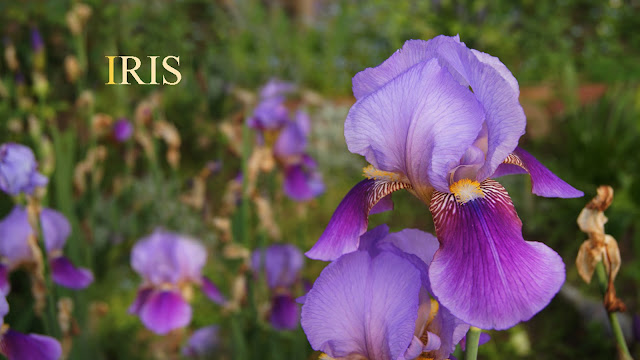 Posted by Melbourne Australia Photos at 04:58:00