Norfolk Island (Norfuk: Norf'k Ailen) is a small island in the Pacific Ocean located between Australia, New Zealand, and New Caledonia, 1,412 kilometres directly east of mainland Australia's Evans Head, and about 900 kilometres from Lord Howe Island. Together with two neighbouring islands, it forms one of the Commonwealth of Australia's external territories. At the 2016 Australian census, it has 1,748 inhabitants living on a total area of about 35 km2. Its capital is Kingston.

Norfolk Island was first settled by East Polynesians but was long unpopulated when it was eventually also settled by Great Britain as part of its settlement of Australia from 1788. The island served as a convict penal settlement from 6 March 1788 until 5 May 1855, except for an 11-year hiatus between 15 February 1814 and 6 June 1825, when it lay abandoned.

On 8 June 1856, permanent civilian residence on the island began when it was settled from Pitcairn Island. In 1914 the UK handed Norfolk Island over to Australia to administer as an external territory. The evergreen Norfolk Island pine is a symbol of the island and thus pictured on its flag. Native to the island, the pine is a key export for Norfolk Island, being a popular ornamental tree on mainland Australia, where two related species grow, and also worldwide.

Norfuk (increasingly spelt Norfolk) or Norf'k is the language spoken on Norfolk Island by the local residents. It is a blend of 18th-century English and Tahitian, originally introduced by Pitkern-speaking settlers from the Pitcairn Islands. Along with English, it is the co-official language of Norfolk Island. 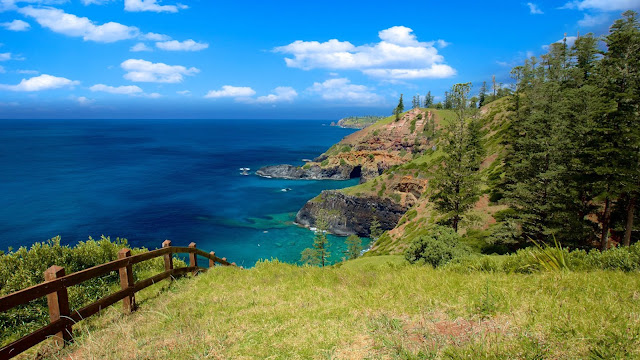 Posted by Melbourne Australia Photos at 04:31:00