Dindymus versicolor (Harlequin Bug) mating on Angelica seed heads: This is a species of cotton stainer bug (red bug), found in south-eastern Australia and Tasmania. In North Central districts of Victoria it is sometimes colloquially known as the "Sex Beetle". An attractive insect, up to 12 mm long with a black head and bands on the fore-wing, and orange/red elsewhere. When the wings are folded, two red triangles appear. Legs are relatively long.

These sucking insects have a reputation as a pest in the garden, damaging a wide range of plants. They are known to damage a variety of crops and ornamentals. The New South Wales Department of Primary Industries (Agriculture) report they attack cotton, pome fruits, stone fruits, fig, grape, kurrajong, strawberry, vegetables, wisteria, dahlia and violets. In winter they find shelter in dark shady places such as under compost, timber, hedges and fence palings. 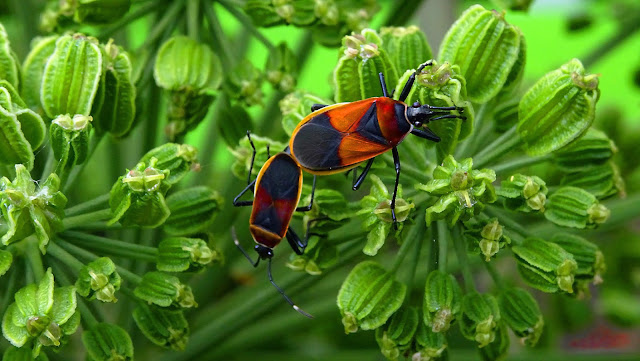