Scabiosa is a genus in the teasel Family Dipsacaceae of flowering plants. Many of the species in this genus have common names that include the word scabious; however some plants commonly known as scabious are currently classified in related genera such as Knautia and Succisa; at least some of these were formerly placed in Scabiosa. Another common name for members of this genus is pincushion flowers. Members of this genus are native to Europe and Asia.

Some species of Scabiosa, notably small scabious (S. columbaria) and Mediterranean sweet scabious (S. atropurpurea) have been developed into cultivars for gardeners. Illustrated here is the Scabiosa columbaria cultivar 'Pink Mist'. Scabiosa plants have many small flowers of soft lavender blue, lilac or creamy white colour borne in a single head on a tall stalk. Scabious flowers are nectar rich and attract a variety of insects including moths and butterflies such as the Six-spot Burnet. Scabiosa species are also used as food plants by the larvae of some Lepidoptera species including Grey Pug. 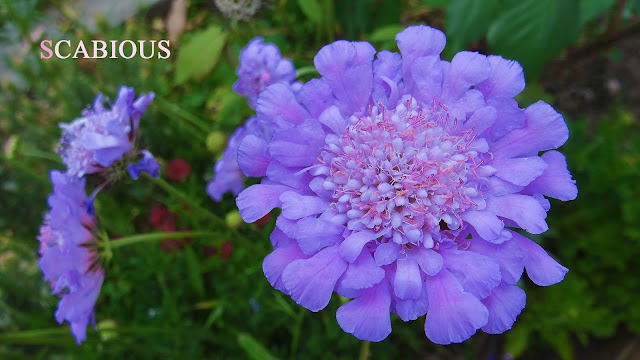 Posted by Melbourne Australia Photos at 05:19:00