Italy (Italian: Italia, officially the Italian Republic (Italian: Repubblica Italiana)) is a country in Southern and Western Europe. Located in the middle of the Mediterranean Sea, Italy shares open land borders with France, Switzerland, Austria, Slovenia and the enclaved microstates San Marino and Vatican City. Italy covers an area of 301,340 km2 and has a largely temperate seasonal and Mediterranean climate. With around 61 million inhabitants, it is the fourth-most populous EU member state and the most populous country in Southern Europe.

Due to its central geographic location in Europe and the Mediterranean, Italy has historically been home to a myriad of peoples and cultures. In addition to the various ancient Italian tribes and Italic peoples dispersed throughout the Italian Peninsula and insular Italy, beginning from the classical era, Phoenicians, Carthaginians and Greeks established settlements in southern and insular Italy, while Etruscans and Celts inhabited the centre and the north of Italy respectively. The Italic tribe known as the Latins formed the Roman Kingdom in the 8th century BC, which eventually became a republic with a government of the Senate and the People.

The Roman Republic conquered and assimilated its neighbours on the peninsula, in some cases through the establishment of federations, and the Republic eventually expanded and conquered most of Western Europe, Greece and the Balkans, the Middle East, and North Africa. By the first century BC, the Roman Empire emerged as the dominant power in the Mediterranean Basin and became the leading cultural, political and religious centre of Western civilisation, inaugurating the Pax Romana, a period of more than 200 years during which Italy's technology, economy, art and literature flourished. Italy remained the homeland of the Romans and the metropole of the Roman Empire. The legacy of the Roman Empire endured its fall and can be observed in the global distribution of culture, law, governments, Christianity and the Latin script.

The Renaissance began in Italy and spread to the rest of Europe, bringing a renewed interest in humanism, science, exploration and art. Italian culture flourished, producing famous scholars, artists and polymaths such as Michelangelo, Leonardo da Vinci, Raphael, Galileo and Machiavelli. During the Middle Ages, Italian explorers such as Marco Polo, Christopher Columbus, Amerigo Vespucci, John Cabot and Giovanni da Verrazzano discovered new routes to the Far East and the New World, helping to usher in the European Age of Discovery. Nevertheless, Italy's commercial and political power significantly waned with the opening of trade routes that bypassed the Mediterranean. Centuries of infighting between the Italian city-states, such as the Italian Wars of the 15th and 16th centuries, left the region fragmented, and it was subsequently conquered and further divided by European powers such as France, Spain and Austria. 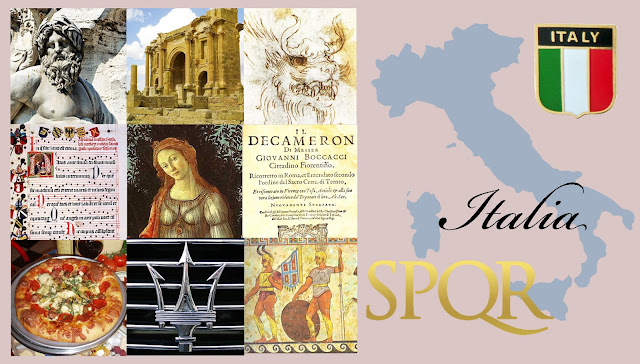