The Azores (Portuguese: Açores), officially the Autonomous Region of the Azores (Região Autónoma dos Açores), is one of the two autonomous regions of Portugal, an archipelago composed of nine volcanic islands in the North Atlantic Ocean about 1,360 km west of continental Portugal, about 1,643 km west of Lisbon, in continental Portugal, about 1,507 km from the African coast, and about 1,925 km southeast of Newfoundland, Canada. Its main industries are agriculture, dairy farming, livestock, fishing, and tourism, which is becoming the major service activity in the region. In addition, the government of the Azores employs a large percentage of the population directly or indirectly in the service and tertiary sectors.

The main settlement of the Azores is Ponta Delgada. There are nine major Azorean islands and an islet cluster, in three main groups. These are Flores and Corvo, to the west; Graciosa, Terceira, São Jorge, Pico, and Faial in the centre; and São Miguel, Santa Maria, and the Formigas Reef to the east. They extend for more than 600 km and lie in a northwest-southeast direction. All the islands have volcanic origins, although some, such as Santa Maria, have had no recorded activity since the islands were settled. Mount Pico, on the island of Pico, is the highest point in Portugal, at 2,351 m. The Azores are actually some of the tallest mountains on the planet, measured from their base at the bottom of the ocean to their peaks, which thrust high above the surface of the Atlantic.

The climate of the Azores is very mild for such a northerly location, being influenced by its distance to continents and the passing Gulf Stream. Due to the marine influence, temperatures remain mild year-round. Daytime temperatures normally fluctuate between 16°C and 25°C depending on season. Temperatures above 30 °C or below 3 °C are unknown in the major population centres. It is also generally wet and cloudy. The culture, dialect, cuisine, and traditions of the Azorean islands vary considerably, because these once-uninhabited and remote islands were settled sporadically over a span of two centuries. 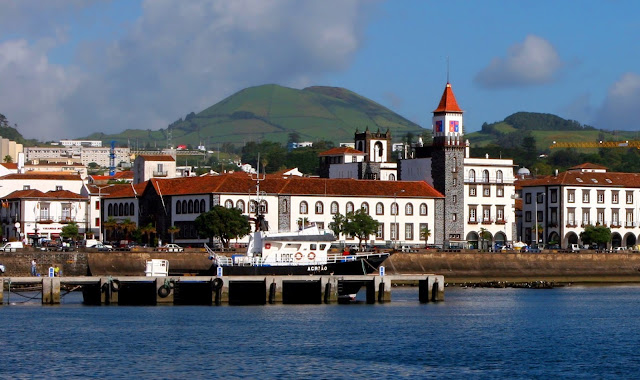 Posted by Melbourne Australia Photos at 03:33:00