The Australian magpie (Cracticus tibicen) is a medium-sized black and white passerine bird native to Australia and southern New Guinea. Although once considered to be three separate species, it is now considered to be one, with nine recognised subspecies. A member of the Artamidae, the Australian magpie is classified in the butcherbird genus Cracticus and is most closely related to the black butcherbird (C. quoyi). It is not, however, related to the European magpie, which is a corvid.

The adult Australian magpie is a fairly robust bird ranging from 37 to 43 cm in length, with distinctive black and white plumage, gold brown eyes and a solid wedge-shaped bluish-white and black bill. The male and female are similar in appearance, and can be distinguished by differences in back markings.The male has pure white feathers on the back of the head and the female has white blending to grey feathers on the back of the head.  Juveniles are blotchy grey as the youngster on the right in the first photo and the one in the second photo. With its long legs, the Australian magpie walks rather than waddles or hops and spends much time on the ground.

Described as one of Australia's most accomplished songbirds, the Australian magpie has an array of complex vocalisations. It is omnivorous, with the bulk of its varied diet made up of invertebrates. It is generally sedentary and territorial throughout its range. Common and widespread, it has adapted well to human habitation and is a familiar bird of parks, gardens and farmland in Australia and New Guinea. This species is commonly fed by households around the country, but in spring a small minority of breeding magpies (almost always males) become aggressive and swoop and attack those who approach their nests. Magpies were introduced into New Zealand in the 1860s but have subsequently been accused of displacing native birds and are now treated as a pest species. Introductions also occurred in the Solomon Islands and Fiji, where the birds are not considered an invasive species.

The Australian magpie is the mascot of several Australian sporting teams, most notably the Collingwood Magpies and Port Adelaide Magpies. There are several names given to a group of magpies, but perhaps the most descriptive is “a parliament.” The birds have earned this title as a result of their often appearing in large groups in the Spring, looking stately and cawing at each other. 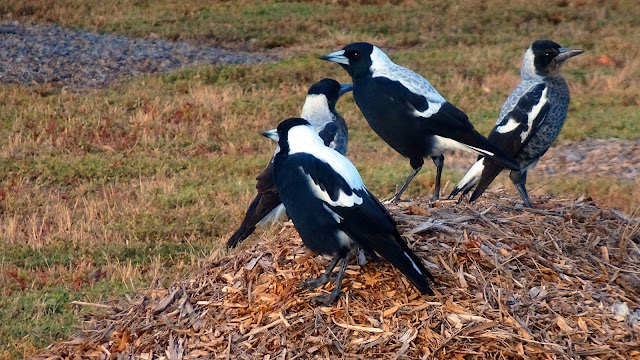 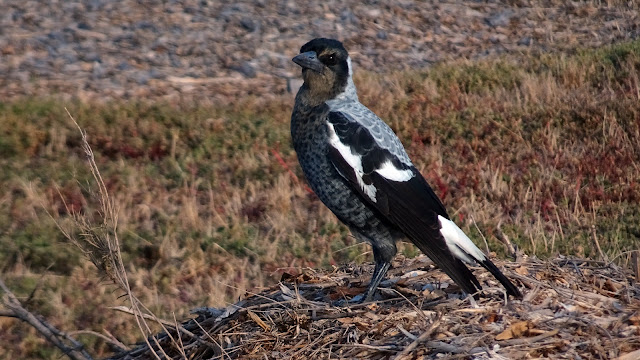 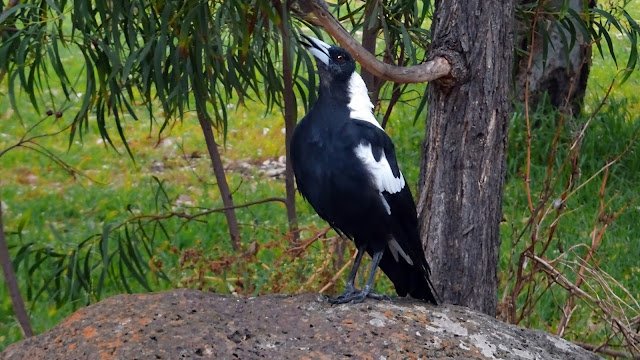 Posted by Melbourne Australia Photos at 05:00:00