Zantedeschia is a genus of 8 species of herbaceous, perennial, flowering plants in the family Araceae, native to southern Africa from South Africa north to Malawi. The genus has been introduced on all continents except Antarctica. Common names include arum lily for Z. aethiopica and calla and calla lily for Z. elliottiana and Z. rehmannii, although members of the genus are neither true lilies of Liliaceae, true Arums, or true Callas (related genera in Araceae). They are also often confused with Anthurium. The colourful flowers and leaves of both species and cultivars are greatly valued and commonly grown as ornamental plants.

Zantedeschia elliottiana, golden arum or calla lily, is a herbaceous ornamental plant growing from a bulb. It is said to occur in the province of Mpumalanga in South Africa, although other sources say that it is not found in the wild but appears to be a hybrid of garden origin.

Z elliottiana is a herbaceous plant up to 60 cm, with large deep green leaves spotted with white. It is summer-flowering plant with a yellow spathe marked with purple at the base The spathe surrounds a yellow spadix which occasionally produces a spike of bright yellow berries that are attractive to birds. 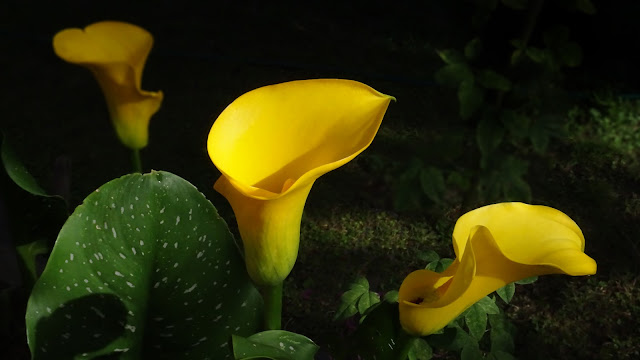