Malta, officially known as the Republic of Malta (Maltese: Repubblika ta' Malta), is a Southern European island country consisting of an archipelago in the Mediterranean Sea. It lies 80 km south of Italy, 284 km east of Tunisia, and 333 km north of Libya. The country covers just over 316 km2, with a population of just under 450,000 (despite an extensive emigration programme since the Second World War), making it one of the world’s smallest and most densely populated countries.

Malta has two official languages: Maltese and English. Malta’s location has historically given it great strategic importance as a naval base, and a succession of powers, including the Phoenicians, Carthaginians, Romans, Moors, Normans, Sicilians, Spanish, Knights of St. John, French and British, have ruled the islands.

Valletta is the capital city of Malta, colloquially known as Il-Belt (“The City”) in Maltese. Geographically, it is located in the South Eastern Region, in the central-eastern portion of the main island of Malta having its western coast with access to the Marsamxett Harbour and its eastern coast in the Grand Harbour.

The historical city has a population of 6,444 as of March 2014, while the metropolitan area around it has a population of 393,938. Valletta is the southernmost capital of Europe and the second southernmost capital of the European Union after Nicosia. Valletta contains buildings from the 16th century onwards, built during the rule of the Order of St. John also known as Knights Hospitaller. The city is essentially Baroque in character, with elements of Mannerist, Neo-Classical and Modern architecture in selected areas, though the Second World War left major scars on the city, particularly the destruction of the Royal Opera House.

The City of Valletta was officially recognised as a World Heritage Site by UNESCO in 1980.The official name given by the Order of Saint John was Humilissima Civitas Valletta—The Most Humble City of Valletta, or Città Umilissima in Italian. The city's fortifications, consisting of bastions, curtains and cavaliers, along with the beauty of its Baroque palaces, gardens and churches, led the ruling houses of Europe to give the city its nickname Superbissima—Most Proud. 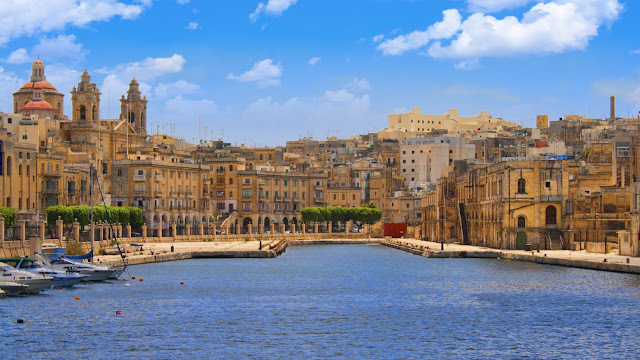