Tragopogon porrifolius is a plant in the Asteraceae family cultivated for its ornamental flower, edible root, and herbal properties. It also grows wild in many places and is one of the most widely known species of the salsify genus, Tragopogon. It is commonly known as purple or common salsify, oyster plant, vegetable oyster, Jerusalem star, goatsbeard or simply salsify (although these last two names are also applied to other species, as well).

Tragopogon porrifolius is a common biennial wildflower (or weed!), native to Mediterranean regions of Europe but introduced elsewhere, for example, into the British Isles (mainly in central and southern England), other parts of northern Europe, North America, and southern Africa and in Australia; in the United States it is now found growing wild in almost every state, including Hawaii, except in the extreme south-east. The plant grows to around 1.2 m in height.

As with other Tragopogon species, its stem is largely unbranched, and the leaves are somewhat grasslike. It exudes a milky juice from the stems. In the UK it flowers from May to September, but in warmer areas such as California it can be found in bloom from April. The flower head is about 5 cm across, and each is surrounded by green bracts which are longer than the petals (technically, the ligules of the ray flowers). The flowers are like that of Tragopogon pratensis, but are larger and dull purple, 3–5 cm across. The flowers are hermaphroditic, and pollination is by insects. The fruits are achenes.

The root, and sometimes the young shoots, of T. porrifolius are used as a vegetable, and historically the plant was cultivated for that purpose; it is mentioned by classical authors such as Pliny the Elder. Cultivation in Europe began in the 16th century in France and Italy. In the United Kingdom it was initially grown for its flower and later became a mildly popular vegetable in the 18th century but then declined in popularity. Presently the root is cultivated and eaten most frequently in France, Germany, Italy and Russia. However, in modern times it has tended to be replaced by Spanish salsify (Scorzonera hispanica) as a cultivated crop. 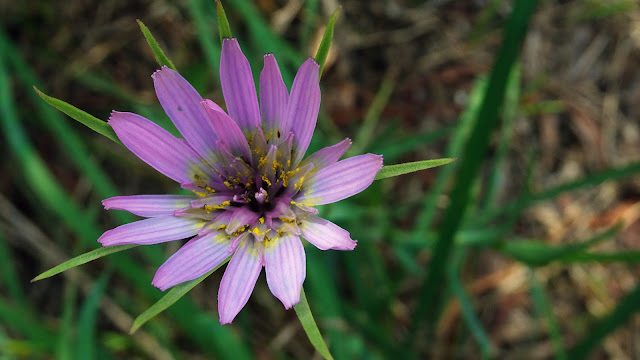 Posted by Melbourne Australia Photos at 03:23:00