Auranticarpa rhombifolia is a rainforest tree of eastern Australia. Known as the diamond leaf pittosporum, this tree is planted in many parts of Australia as an ornamental. The white flowers and orange fruit make it a most appealing street or garden tree. Other common names include hollywood, diamond leaf laurel, white myrtle and white holly.

Australian botanists recently examined the large genus Pittosporum and decided the more northerly examples are significantly different from those in the south. Subsequently, a new genus was created Auranticarpa, which means "gold fruit". The range of natural distribution is on red–brown basaltic soils from Richmond River, New South Wales (28° S) to Forty Mile Scrub National Park (18° S) in tropical Queensland.

The tree grows well in Melbourne and its masses of small golden orange fruit make for a cheerful sight in Winter. 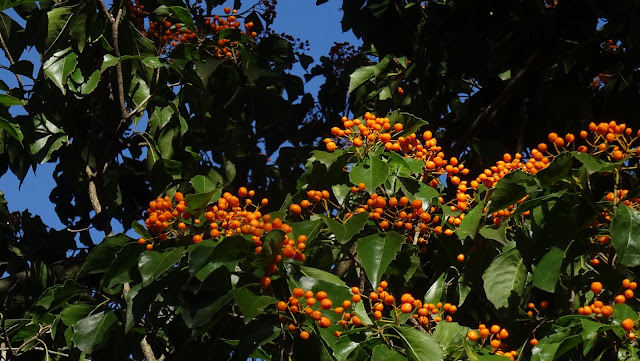 Posted by Melbourne Australia Photos at 05:54:00