Warsaw (Polish: Warszawa), is the capital and largest city of Poland. It is located on the Vistula River, roughly 260 kilometres from the Baltic Sea and 300 kilometres from the Carpathian Mountains. Its population is estimated at 1.711 million residents within a greater metropolitan area of 2.666 million residents, which makes Warsaw the 9th most populous capital city in the European Union. The area of the city covers 516.9 square kilometres, while the city's agglomeration covers 6,100.43 square kilometres.

Warsaw is an Alpha–global city, a major international tourist destination and an important economic hub in East-Central Europe. It is also known as the “phoenix city” because it has survived so many wars throughout its history. Most notably, the city had to be painstakingly rebuilt after the extensive damage it suffered in World War II, during which 85% of its buildings were destroyed. On 9 November 1940 the city was awarded Poland’s highest military decoration for heroism, the Virtuti Militari, during the Siege of Warsaw (1939).

We visited Warsaw in July 2003 and enjoyed the trip immensely. The people were wonderful, there was an enormous number of things to see, a city of great beauty, art, culture and courage. The Mermaid of Warsaw (Polish: Syrenka Warszawska) is a symbol of Warsaw, represented on the city’s coat of arms and well as in a number of statues and other imagery.

The sculpture in Warsaw’s Old Town Square seen here was designed by Varsovian sculptor Konstanty Hegel. Originally (1855-1928) and now (since 2000) it stands in the marketplace. At other times, it was moved to different places in Warsaw. In 2008, the original sculpture made of bronzed zinc was taken from the market for maintenance work. The sculpture was in a very poor condition due to mechanical damage and numerous acts of vandalism. The repaired original was transferred to the Museum of Warsaw, and replaced with a copy of made by the Jacka Guzery foundry in Dąbrowie near Kielce. 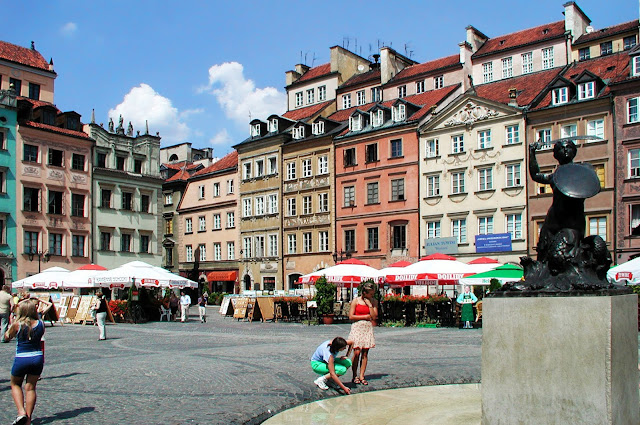 Posted by Melbourne Australia Photos at 00:24:00