The Dusky Moorhen (Gallinula tenebrosa) is a medium-sized, dark grey-black water bird with a white undertail. It has a red bill with a yellow tip and a red facial shield. Young birds are much duller and browner than adults, with a greenish bill and face shield. It is found from Indonesia through New Guinea to Australia. It is widespread in eastern and south-western Australia, ranging from Cooktown to eastern South Australia and in the southern corner of Western Australia.

Dusky Moorhens are found in wetlands, including swamps, rivers, and artificial waterways. They prefer open water and water margins with reeds, rushes and waterlilies, but may be found on grasses close to water such as parks, pastures and lawns. The Dusky Moorhen has been favoured by artificial water sources such as dams, ponds and lakes in parks and gardens and associated grassy areas. However, wetland drainage in other areas may have negative impacts.

These birds feed in the water and on land on algae, water plants and grasses, as well as seeds, fruits, molluscs and other invertebrates. They will also eat carrion (dead animals) and the droppings of other birds. They do not dive when feeding; the tail is always visible above the water when upended. 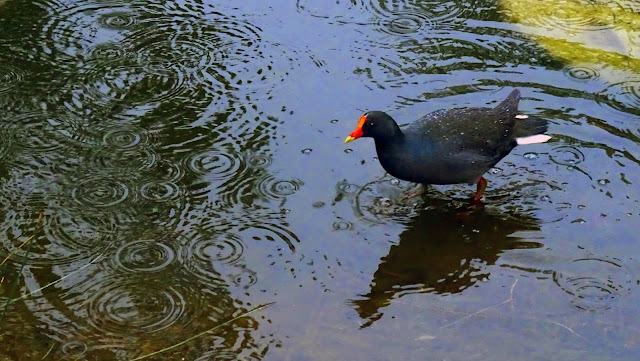