Federation Square is a civic centre and cultural precinct in the city of Melbourne. It is a mixed-use development covering an area of 3.2 hectares and centred around two major public spaces, open squares (St. Paul's Court and The Square) and one covered (The Atrium,) built on top of a concrete deck above busy railway lines. It was opened in 2002.

Controversial since the demolition of the industrial buildings that preceded it, Federation Square is also globally famous for its alleged ugliness. In 2009, the Melbourne newspaper The Herald Sun reported that Federation Square is fifth on its list of eyesores, alongside a library in Kosovo, a television tower in Prague and New Zealand's 1970s-era parliament building. A poll conducted by the newspaper also found that 64.13% of the random 2000 Melburnians surveyed responded "Yes, it's an eyesore". The 124 comments on this news article range from the most favourable which suggest that while Federation Square is not picturesque, Melburnians should "get over" the concrete ugliness of it to those who strongly advocate the demolition of an unsightly building that is a "pimple" in a heritage-landscape - with St Paul's Cathedral and Flinders Street Station in its immediate vicinity.

It is Victoria’s second most popular tourist attraction, attracting 8.99 million visitors in 2011. Unlike many Australian landmarks, it was not opened by the Queen, nor was she invited to its unveiling. Federation Square is home to The Ian Potter Centre: National Gallery of Victoria Australia; ACMI; NGV Kids Corner and No Vacancy Project Space; as well as a wide range of restaurants, cafés, bars, visitor services and shops. The Melbourne Visitor Centre is also located at Federation Square, providing a one-stop shop for information on Melbourne for local, interstate and international visitors alike. 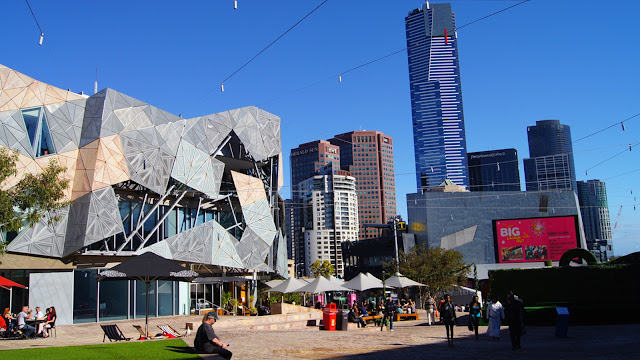 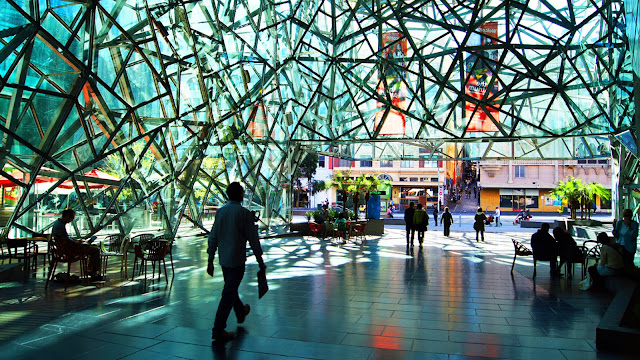