Basel (also Basle; French: Bâle; Italian: Basilea) is a city in northwestern Switzerland on the river Rhine. Basel is Switzerland’s third-most-populous city (after Zürich and Geneva) with about 175,000 inhabitants. Located where the Swiss, French and German borders meet, Basel also has suburbs in France and Germany. In 2014, the Basel agglomeration was the third largest in Switzerland with a population of 537,100 in 74 municipalities in Switzerland and an additional 53 in neighbouring countries (municipal count as of 2000).

The official language of Basel is (the Swiss variety of Standard) German, but the main spoken language is the local variant of the Alemannic Swiss German dialect. The city is known for its various internationally renowned museums, ranging from the Kunstmuseum, the first collection of art accessible to the public in Europe, to the Fondation Beyeler (located in Riehen), and its centuries long commitment to Humanism, offering a safe haven among others to Erasmus of Rotterdam, the Holbein family, and more recently also to Hermann Hesse and Karl Jaspers.

Basel has been the seat of a Prince-Bishopric since the 11th century, and joined the Swiss Confederacy in 1501. The city has been a commercial hub and important cultural centre since the Renaissance, and has emerged as a centre for the chemical and pharmaceutical industry in the 20th century. It hosts the oldest university of the Swiss Confederation (1460).

Basel has often been the site of peace negotiations and other international meetings. The Treaty of Basel (1499) ended the Swabian War. Two years later Basel joined the Swiss Confederation. The Peace of Basel in 1795 between the French Republic and Prussia and Spain ended the First Coalition against France during the French Revolutionary Wars. In more recent times, the World Zionist Organisation held its first congress in Basel on 3 September 1897. Because of the Balkan Wars, the Second International held an extraordinary congress at Basel in 1912. In 1989, the Basel Convention was opened for signature with the aim of preventing the export of hazardous waste from wealthy to developing nations for disposal. 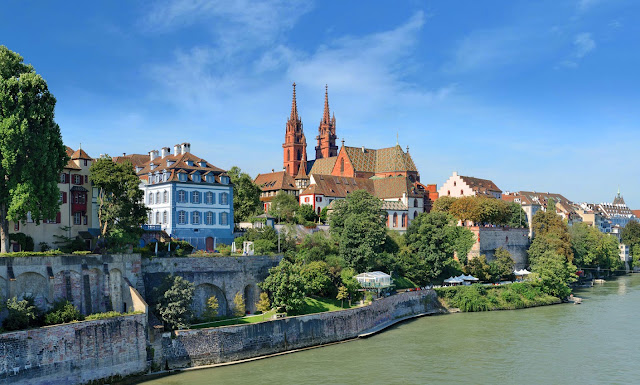 Posted by Melbourne Australia Photos at 04:49:00